My 3-year-old is not speaking but pointing

My son is 3 years and 3 months old. He does not talk at all. He had an assessment when he was 2.5 years old, but the doctor would not want diagnose ASD as he is still young. He has been going for occupational therapy and speech therapy since then (~8-9 months now).

His occupational therapy trainer says she does not see a problem in therapy as he does all the activities properly. He can count to 5 using fingers, identify (~6) body parts, numbers till 9, primary colors, animals and birds, shapes. Responds to his name. Could be developmental delay but can't say it is a disorder also. Hearing test came positive and no problems were found in hearing.

However, if he wants something he takes me or wife to it. Points to things when asked to identify. Identifies me as dad and my wife as mom and points. Just that he does not speak.

One behaviour is that he is fascinated towards things that spin. He used to spin wheels and any object that can rotate a LOT. Although, with therapy this has reduced considerably but still present to about four to five times a week..

My question: In view of these points, are there any statistics on how many kids eventually start speaking and at what age (or not speak at all)?

Edit: Thanks to all who provided support here. Update after 5 and half years.

long version: We continued the speech therapy. once fine day at about 3.5 years old, he started to say the alphabet sounds and very slowly started babbling other one, two and three letter words. His speech was still behind about 3 years compared to his age. and was severely limited.

difficult phase: He also had other indications, like interest in spinning things, unable to eat certain fruits or foods; he would get sick (vomit), social interactions was less. He was playing by himself. He would NOT get bored of watching the cartoon over and over again. He would even watch some sections of cartoons over many hundred times.

We ended up with a diagnosis of Autism.

Overcoming difficulty: We accepted that it is what it is and nothing is going to change the diagnosis. This was very important in moving on and go to the stage of providing the support he needs. He improved a lot and and is able to communicate a lot better now but still has his challenges. Even now, his speech is partially because of memorizing speech and not because of understanding speech.

Hang in there, the difficult times do pass and it does get better. My son is thriving now in a normal school which understands his problems and supports him. Our life also has changed forever but it is our responsibility and happiness to see to that he has a great start in life :)

tldr: son did start to speak when he was about 3.5 years. He had a Diagnosis of Autism.

Autism is not a disease and cannot be cured. It is a neurological conditions that needs support and understanding over a life time

As I'm sure your OT and SLP have told you, there's a lot of natural variability in when kids hit language milestones, and late language emergence is not always cause for concern.

Your child --- with no expressive vocabulary at all at 3 years --- is an unusual case, though, which means it's hard to calculate statistics on trajectories for children with his profile. His situation is rare, so we just don't know that much about it, I'm afraid.

That said, there are well-documented cases of children who are classified as "late talkers" but then eventually end up with language ability that is well within the normal range for their age --- these children are sometimes called "late bloomers" and may make up as much as 75% of late talkers (see citations here for studies on this phenomenon). Some late talkers don't end up "catching up" to their peers, though, and may eventually be diagnosed with Specific Language Impairment (if there are no signs of developmental delays in any other areas) or another diagnosis.

Here's a brief overview of several relevant studies, taken from this article (the numbers in square brackets below refer to other studied reference in the article --- to find those studies, open the article and scroll down to the references list at the bottom):

''Late bloomers'', that is, children who make good progress in language after a slow start, are well-documented in the literature. For instance, one study followed 26 children aged 2 years old, who were recruited because their parents reported that they understood complete sentences but could say only a few words 7. Five months after the initial assessment, around one-third of the children still had problems, one-third had made some improvement, and one-third were in the normal range. Another study followed 10 children who scored in the bottom 10% for expressive vocabulary at the ages of 18 to 29 months [8]. One year after initial assessment, six had 'caught up', but the remaining four still had delayed language. Similar figures were reported by Rescorla and Schwartz [9], who followed up 25 boys who had specific expressive language delay when first seen at 24 to 31 months of age. By follow-up at 3 to 4 years old, ten boys no longer had impaired language and two of these were above average in their utterance length. However, the remaining 15 children still had significant language delays. Although the proportion of late talkers who have clinically significant language impairment appears to decline with age [10], some children fail to catch up, and still have persisting problems well into middle childhood: for instance, Moyle et al. [11] reported that 37% of late talkers were receiving speech and language therapy (SALT) at 5 years of age, and Rice et al. [12] found that around 20% of late talkers had language impairment at 7 years of age. Measures of morphosyntax appear to be particularly sensitive in revealing persisting language deficits in late talkers [12,13].

So as you can see, a substantial proportion of children with late language emergence end up not having any language impairment a few years later, but that doesn't necessarily tell you anything specific about your son's case.

There are a couple important things to consider (and talk about with your OT and SLP) when trying to figure out what your son's trajectory might be like:

First, does he show impairment in any areas other than expressive language? The late talkers and late bloomers studied in the scientific literature are cases where children understand language well, they just don't speak (or have trouble speaking). These children score within normal ranges on nonverbal intelligence tests, and they lack symptoms that might indicate another disorder (such as ASD). If your son has a broader developmental delay, then the studies on late talkers, SLI, etc. are not relevant. Instead, you'll want to consider the specifics of language development for children with his diagnosis (which again, I'm sorry to say, can raise more questions than answers --- in children with ASD, for example, there is huge variability in language trajectories and eventual outcomes).

The other thing to consider is the severity of his language impairment and the trajectory of his learning over time. As many as about 15% of 30-36mos have late language emergence (see this link for citations), but many of those children do say some words, just substantially fewer than is typical at that age. So right now, your son is probably at the extreme end of the distribution for late talkers. In the publicly available data at WordBank, there are vocabulary scores from more than 5000 children 16 to 30 months old, and there are 0 children with no productive vocabulary at 30 months (suggesting that the prevalence is less than 1/5000). You can explore the data on the site, or download it to analyze on your computer. Here is a plot of deciles of the size of productive vocabulary (number of unique words spoken) from 16 to 30 months: 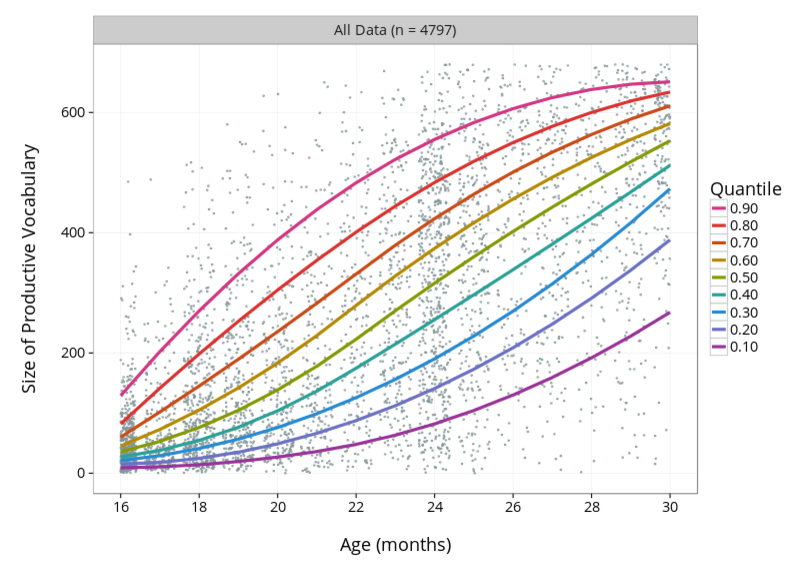 You can see that at 30 months, only 10% of children have less than about 225 words in their productive vocabulary, according to these data (note the disclaimer on this page, though, emphasizing that this may not be a representative sample of the population). I downloaded the data myself to more closely examine the children at the high end of the age range. In these data, only about 1% of children 28-30mos say fewer than 50 words.

Late bloomers typically catch up to their peers around age 3-5, so your SLP will probably be watching your son closely for improvements over the next several months. If he starts speaking, he may still have a small vocabulary for a while relative to his peers, but his rate of vocabulary growth (not just the actual size of his vocabulary) may give you an indication of whether he's likely to ever catch up or if he will retain a language impairment (see relevant citations here).

Your son's situation is quite rare, which is why there are no statistics available to help you predict when he might begin speaking, if at all.

If he doesn't show signs of developmental delay in areas other than speaking, then he might be a "late bloomer" (a child who starts speaking late but ends up without any remaining language impairment). If so, the literature suggests that he'll catch up quickly over the next year or two. There's no way to really know for sure, though, other than to wait and see.

I used to do this; teach him sign language so that you can communciate better. Make the sounds of the words as you sign.

Signing isnt hard to learn at a basic level - get a book from amazon. My two year old was learning 7 signs a day and telling us what she wanted to eat, drink, do etc. She's now speaking like a four year old.

6
Can Not Speaking Be Due To Just Plain Refusing To Speak?
3
How to get help for my non-verbal toddler who can get screamig fits?
5
Moving my speech delayed 5.5 yo son to a foreign environment
3
Should I be concerned that my 2 year-old cannot pronounce sounds like "vee" and "fee"?
4
How to get the attention of my 3.5-year-old?
2
How to help my 4-year-old focus on his tasks instead of zoning out?
1
Is it normal for a 3-year-old to repeat the question before answering?
9
What to do when my 3.5-year-old says “I don’t love you, I love mommy.”?
4
How do I motivate my 6 year old son to practise speech therapy at home?