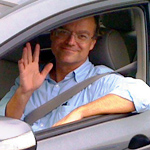 L. Van Warren (1956-) grew up in Arkansas, Missouri and Illinois. For ten years he was a system's engineer at NASA's Jet Propulsion Laboratory in Pasadena, California. He was the technical director for the ubiquitous "Earth from Space" picture that covered Al Gore's book, "Earth in the Balance". He is a member of the Screen Actor's Guild and coined the phrase, "If this car had wings it would fly" during a General Motors commercial. He wrote the world's first interactive calculus book featuring computer algebra and symbolic geometry simultaneously. His interests include inventing, teaching, mathematics, playing the violin, bicycling, swimming, and in his earlier days, skydiving. He currently spends his time writing, simulating and exploring.

We respect a laser-like focus on one topic.

All Questions Answers
Votes Newest
1 How do I approach my 13-year-old daughter's confusion regarding her sexuality? Jun 6 '14