What kind of spoon should be used to feed the infant who is used to be fed by the bottle?

The tea spoon holds quite a less amount of milk. The kid of 5 months old is used to bottle feeding for past 4 months.

I was thinking of using a soup spoon instead (which is round and has depth). Will that be a bad idea?

What kind of spoon should be used such that she doesn't miss the bottle too much?

I suggest a specific baby spoon. These are usually plastic or with a rubber coating. An adult metal spoon might hurt them if they flail, protest or bite down hard.

That said, what is wrong with the bottle? Current advice is to leave weaning (onto solid foods) until after 6 months and if breast milk is not an option, the bottle seems like the best way to feed until weaned.

In American culture, it is unusual to wean a child from sucking at this early an age, but apparently in other cultures is is not uncommon to move to a spoon as early as 8 months as a transition to cup.

Scientistst in Japan looked at three different spoon shapes which they evaluated for confusion with regard to lip position, spillage and choking. While none of the spoons was better or worse for spillage or choking, one spoon shape was definitely less confusing for the infant to use: 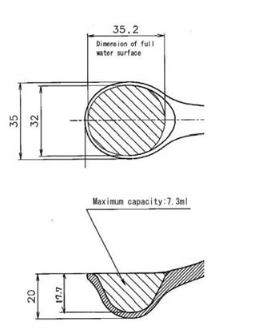 The spoon should be supported by the lower lip, with the surface of the water touching the upper lip. However, if the width of the mouth is insufficient to accommodate the spoon, problems will ensue with regard to lip position and the ability to intake liquid. If no such problems occur, then the infant will usually sip twice from each spoonful...

We concluded that there are three reasons why the hemispherical spoon effectively prevented infants from becoming confused with regard to lip position. First, it was possible to drink liquid from this spoon from any direction, which means that a mother can assist her infant in feeding from any direction. Second, the width of the bowl was appropriate for an infant’s mouth size. (In our previous study, the width of the spoon bowl was approximately 2/3 the width of the infant’s mouth.) Third, the size of the spoon was such that the amount of liquid that filled the spoon was suitable for one mouthful for an infant. To sip liquid, an infant’s upper lip must touch the surface of the liquid. For this to occur, the spoon must be filled with a sufficient amount of liquid.

If you have to tilt the spoon or tip the baby's head back to dispense the liquid, the child's airway may open, creating a higher risk of aspiration.

The most important consideration, of course, is to make sure the infant is getting the same amount of nutrition as he would from bottle or breast. It seems like it would take a long time to feed 8 oz from a spoon, but I have never tried it!

I know this doesn't really address the question as asked. However, due to a conversation in chat with the poster as well as other simultaneously asked questions, here is the best answer I can offer at this time.

There is a bit of a debate over when to wean baby entirely - in the US at least, but the standard is about one year to one and a half years here. There are a lot of things to consider when weaning - not the least of which includes the baby's nutritional health, mental well-being and immune health. Your other question here addresses some of the concerns doctors might have regarding bottle use in general.

A baby can be eating solid foods and still drinking mother's milk for years if mother and baby desire it to be so. What is best for everyone, as I said, is up for debate and quite individual. I thought this short article posted on La Leche League's website was interesting, though not very conclusive (and absolutely in keeping with La Leche League's purpose - to raise awareness about breast feeding and fully support a mother's right to do so as long as she feels is right). Here is what the World Health Organization has to say about it.

As a global public health recommendation, infants should be exclusively breastfed1 for the first six months of life to achieve optimal growth, development and health2.

Thereafter, to meet their evolving nutritional requirements, infants should receive nutritionally adequate and safe complementary foods while breastfeeding continues for up to two years of age or beyond.

Most doctors in the US will disagree with the two years part and shorten that number to closer to about a year so the American Academy of Pediatrics recommends that 18 months at most is the time for full weaning.

At our house, we introduced solids at about the times we would normally consider to be meal times (breakfast, lunch and dinner), but if Alice was hungry at any other time, her "snacks" were still mother's milk (or if we had been feeding formula, we probably would have used it). She also still got to nurse just before I left for work, when I arrived home, and right before bed. As she consolidated her eating habits, the frequency of nursing dropped because she no longer asked for it. At some point, she no longer needed to nurse right when I got home (and I no longer needed her to either) It wasn't painful - no one missed anything, no difficulty at all. Because I let her take the lead on how often she needed to "snack," she actually weaned herself - and earlier than I would have personally anticipated.

The spoon you choose to use is irrelevant to the bottle feeding if you are only using the spoon to introduce the new foods or, "solids." Using a baby spoon is ideal as it will be safest for baby, and easiest to use (grips for the parent, and all kinds of technologies involving the shape of the handle are available).

Continue using the bottle (or breast) for milk feedings, and just add the spoon for introducing other foods. Wean away from the bottle at night first by beginning to cut down on night-time feedings through sleep training and other similar methods. Slowly reduce her intake of milk and introduce a sippy cup as soon as you think she is ready to use one. The infant I care for already uses one for his water with his other foods at 7 months old - simply remove the rubber piece that causes a requirement for sucking and you can carefully pour in the milk/water/whatever if your child is unable to hold the cup or regulate outpouring of the liquid.

If there is a separate medical issue that requires letting go of the bottle entirely even at this early stage - I recommend a switch to a sippy cup rather than a switch to a spoon for this purpose.

Not the answer you're looking for? Browse other questions tagged infant feeding bottle-feeding weaning or ask your own question.

2
What diseases are caused by bottle feeding and how can they be prevented?
3
How long is it okay for a baby to remain on just breastfeed?

11
What are the benefits of breastfeeding vs. bottle feeding at 8 months?
4
What is the optimal way to store and use pumped breast milk?
2
For an infant, at what age should we replace the bottle with a cup, and how?
2
What's the harm if I let my infant drink all her semi solid food through her bottle til she turns one year old?
1
What are the vegetables we can feed a two years old baby?
0
Sleeping and eating issues at night for a 3 month baby
7
Is it ok to stop breast milk at 7.5 month?
1
Bottle fed Baby suddenly refuse bottle
23
Is it ok to let my 3 month old drop her head a few inches during 'tummy time'?