Should a 7 day old be prevented from raising her head on her own?

My 7 day old baby raises her head up and holds it there for about 2 seconds when I try to burp her by placing my hand on her chest and neck, bending her on -45 degree angle and then patting her back.

Should I be concerned?

I wouldn't suggest bending your baby is a good idea. Generally letting them bend over your hand or shoulder should be enough to allow for successful burping. Example picture below: 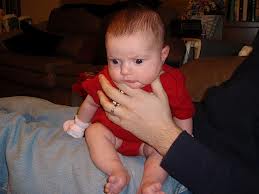 If she raises her head, that is perfectly normal. Babies exercise their neck muscles this way. At this stage they will only be able to hold it for one or two seconds, but as they develop they will be able to hold their head up for minutes at a time. THis is an essential step before crawling.

Let this be a lesson for the rest of your parenting.

You know when your child is ready and/or strong enough for something when they know they're ready for it, and are trying to do it. Don't try to prevent it from happening, even if you think they're not ready for it (unless it's life-threatening, and this isn't). You can encourage them to do more or better, but keep in mind that much of the time that won't work either. But never hold them back.

Examples of this: When my oldest son was 3, he "wasn't old enough" to play in the McDonald's playspace. Once he was old enough, it was impossible for us to convince him otherwise. It was at least a year before he would even dare. Our second child, by contrast, was climbing not only on that playground, but every other playground he wanted to by the time he was about 48 months old. The "recommended age" boilerplate is just that - a recommendation, and one you can ignore if you want.

When our youngest was about 6 months old, no matter what we said, his older brother started wrestling with him. The younger one didn't care or even mind. He believed that this was how you play. He's now stronger and more coordinated as a result, we think (or maybe that's just due to how clumsy our oldest is in comparison). He's certainly more willing to play rough with the older kids though, and that's in his favour.

Not the answer you're looking for? Browse other questions tagged infant newborn health or ask your own question.

11
At what age should my baby be expected to support her own head?
9
How to know whether the baby has had her fill while breastfeeding?
14
How long can a newborn girl bleed from her vagina?
4
9 month old with an imperative to sit
6
How can I make my 3 weeks old to sleep on his own?
7
To hold a newborn upright too early (under 2 months) will harm his spine?
3
Am I burping my 1-week-old too hard?
7
2 month old doesn't cry in the middle of the night for food, only smacks her lips or sucks on her hand
23
Is it ok to let my 3 month old drop her head a few inches during 'tummy time'?
1
Putting a newborn on his tummy is a must?