Toddler has a strong preference for one parent

Our almost 2 year old toddler has developed a strong preference for me. In mild doses, this was acceptable but it is getting pretty out of hand. She cries when my husband, her father, tries to hug her, kiss her, put her to bed, etc. He literally has to bribe her to spend time with her - bribing with TV, or going to look at flowers, etc. But if he just wants a hug from her - she cries and runs towards me.

This behaviour is causing problems both of us: for me, it's just tiring. And for my thick-skin husband - well, he is still human and craves his daughter's love.

Now, there are some things she will go to him for. For example, usually, my husband is the one who replaces all the batteries in the toys, turns the TV on, etc. So if she needs something done - i.e. a toy is broken because the batteries are dead, she'll readily say "Dada fix" and take the toy to him for fixing. If he insists that she hug him before he fixes, she'll just drop the toy and move onto something else.

My husband and I both work full-time; however, I work from home (we have a separate caregiver) so she does see me more. On a day-to-day basis I probably spend an hour more with her than my husband (no commuting :)). I spend time with her by drawing, reading books, singing nursery rhymes, swimming, etc. My husband spends time by taking her gardening with him, playing in the sandbox, building blocks, going on walks, watching TV, etc. My husband and I alternate waking up in the morning for the kids (and feeding them breakfast), as well as cooking dinner (which our daughter "helps" us with).

Suffice to say, I don't think it is the issue of how much time we spend with the kids - I think we are fairly equal in quality and quantity of activities.

Did other parents have this issue? How did you resolve it? Is it something they grow out of?

In my experience it all ebbs and flows.

My son exhibited some of the same behavior, though not the same degree, culminating around 2 years old. He is about to turn 4 and things have come full circle. He started coming to me for comfort around 2 and a half and sometimes even preferred my comfort when my wife was pregnant with our second child. Since the birth 4 months ago our son has migrated back to needing more mommy time but it's not as bad as it once was and is clearly in reaction to the baby.

The best advice I can give is what I consider to be the gospel of parenting; this too shall pass. Be patient. Be persistent. Don't push her away and don't chide her for not giving daddy his due attention. Something like "it makes daddy sad when you don't want to play with him" is as far as I would go. Even that is more for daddy than it is for your daughter. Two is a tough age because their grasp on language is very deceptive. While they understand things you expect them not to they also have a very hard time with seemingly simple concepts. Subtly and nuance are completely lost on them. 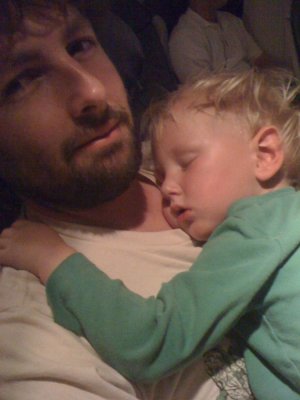 While on a flight to Austin he was on his mom's lap, cranky and wanting sleep. He reached for me and in stunned silence I took him on my chest. He promptly fell asleep and I can't tell you how over joyed I was. It was by no means the first time I had comforted him to sleep but all previous events had been when mom was not around. It was, however, the first time that he chose me for comfort over mom.

Great answer from Thomas Paine. My four kids all did this when they were small; the youngest, now four years old, still prefers her mother. shrug Their personalities are in constant flux at that age, and they will eventually come around. But I agree, waiting for it can be discouraging.

I adopted a cat that had been shuffled around from house to house several times in his early kittenhood. One of the people at his last residence was a woman who would pick him up and force him to sit in her lap. "Love me! Love me!" she would say. The cat would just get more and more tense over time. It would have this miserable, trapped expression on its face. Finally, she would let it go, and it would bolt away from her at top speed.

That woman's mistake was in thinking only of her desire for affection from the cat. It wasn't pernicious - she just didn't know any better. She thought that a human picking up a cat should normally result in happy fun petting time, and didn't realize that the cat had its own preferences and might prefer to do its own thing, and have a say over whether or not it was picked up by a creature ten times bigger and more powerful than it. (Does that remind you of an infant human's perspective? It should!)

I also wanted affection from him, of course; he's a beautiful cat. Who wouldn't? I never forced him to accept my affection, but still he shied away from me. If I pet him, he would immediately walk away because it reminded him of all the times before when he'd been forced to accept human affection.

It wasn't until I left him alone and stopped approaching him for affection that he finally opened up to me. I would still try to pet him occasionally, but if he got up and walked away, I immediately withdrew all attention and left him to his own devices. I wouldn't even look at him - I'd just calmly go about my day.

It took awhile - months, in fact. Slowly, tenuously, he became more curious about me. I kept up my strategy, and it worked. It STILL works. Now, he follows me around all the time. I'm the first person he goes to for affection. Sometimes he cries when I'm not around. Once it became clear that he wasn't required to share affection with me, that I would never force the issue, he felt like he had some ability to direct his own actions in my presence.

Your daughter is no cat, but being a mammal, she has a similar limbic system. If she feels crowded, she will associate affection with annoyance and possibly a sense of being trapped. If her father picks her up and she squirms, and he tries to clam her down and coo at her, it won't help matters because she already feels put-upon by the encounter. He can't ease her fears because all she can see is the same undesirable context that has arisen so many times before. She will have to create some positive associations re: being affectionate with her father, and for that to happen, I'm afraid he'll have to wait for her to come to him on her own terms. Let him simply make himself available. Sooner or later, she will relax and come around.

Thomas Paine's experience stands out for me because a key ingredient was changed. His son was used to being triggered by his father's presence around the house. Being in the same place where you've felt cornered or over-cuddled in the past, seeing the father act like he's about to pick him up, will raise the same emotions he felt in the past when that happened, and he will fight against it. Being in the airplane deleted a lot of the environmental variables that would have normally triggered his resistance, leaving him open to react in a more relaxed way. If you want to spur this process, perhaps you could try going out of town. Stay in a hotel she's never been to before, and have him leave her be as much as possible.

One thing I would not do is say to her, "It hurts Daddy's feelings when you won't hug him." That will only give her a complex. She's only responding to emotions she has no understanding of or control over. Adding guilt to the mix will only make it worse. Don't make it about Daddy's feelings. She can't help that. She can't even help her own feelings. This is about her limbic system, and you have to interact with it in a way that it understands. Letting her have a sense of personal agency, of control and self-determination - that's the way to do it!

One of my daughters did this, except she wanted me (her dad) not her mum. It lasted what seemed like a very long time (2+ years) but it passed.

Not the answer you're looking for? Browse other questions tagged toddler behavior attachment or ask your own question.

19
Why does my son behave better when he's alone with one parent than with both?
12
Is (supervised) play time alone beneficial for an infant/toddler?
29
What should I be teaching my two year old?
5
How to remove a 3-year-old's "over" attachment to his mother?
10
15 mo old son becomes very fussy every evening when I come home from work
3
How to deal with older sibling taking after the younger - toddler?
3
Improving a parent preference?
1
How to engage with a 2 year old who wouldn't sit still?
8
Getting 3-year-old to hurry up
5
Why does this special tune makes my 2.5 year old daughter sad?