What is the best way to teach my toddler to ride a tricycle?

We got a radio flyer tricycle for our daughter during Christmas, but she has had a hard time grasping the basics (steering and pedaling).

Does anyone have suggestions for the best way to teach her these things?

Since you've already got a tricycle, I would approach it this way:
For starters, disengage the pedals if possible, and just train movement using the feet on the ground. She will learn quickly that the handlebar is very useful for steering and not just to avoid falling off. If you can attach a broomstick handle, you could help with movement while she is training steering. IMHO, train the pedaling as the last step.

This is based on my observations with my own toddler, now age 2½. What he discovered first is that using the pedals is tricky, better save that for later. Steering is tricky too, but less than pedaling. The easiest is to use the feet: sit down and push with the feet. Something like a Bobby-Car is good leg-pushing practice.

Learning to move: Our toddler got a similar push car early on, but with a large handle in the rear so we could push it, too. He couldn't steer it, and he couldn't really move it either, but he loved climbing on it and eventually got the hang of how to move it. I pushed him around the apartment and used the handle to steer in the beginning; he enjoyed the movement and it gave him an understanding that the thing moves best in the directions of the wheels.

Learning to steer: We also got a used tricycle, also with a long "broomstick" handle in the rear. We used that to push him short distances outdoors, and we just kept the front wheel lightly off the ground for easier handling until he learned that steering in the desired direction gave him more control over the movement. The pedals were disengaged during this time, so they served only as footrests but didn't turn with the front wheel.

Learning to pedal: To be honest, we're not really trying that yet, so I can't help with that yet.

Instead, we're training balance. He has moved on from the tricycle to a training bike -- first a small four-wheel (left), then a slightly larger "real" bike without pedals (right). This lets him go fast enough that he can coast a little with lifted feet, and just learn balanced steering -- in my opinion, this is much better than training wheels could ever be. I am convinced that he will learn pedaling easily after that because he's already learned the other parts first. 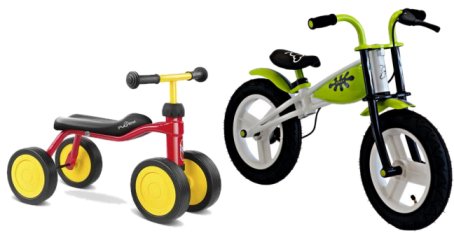 (not quite same scale)

Not the answer you're looking for? Browse other questions tagged toddler or ask your own question.

9
How do we help our toddler to sleep through the night?
36
How can 7-year old defend himself when toddler is hitting?
1
What are some reasons for a toddler to have very inconsistent (frequency and texture) bowel movements?
11
How to teach a toddler to draw?
7
What to do about my toddler wanting everything her way?
10
3yr old refuses to sleep without me
9
How to handle a biting toddler in the crèche?
9
An absent father not being absent anymore
1
What can I do to teach my 22 months old toddler to talk?
0
What to do about a 21-month-old girl who hits other little kids for no observable reason?