Is it reasonable to put limits on a pre-teen playing video games?

Posted on behalf of a friend of mine:

What are appropriate rules for how much time kids actually get to play video games (such as x-box 360, PlayStation 3, or on the PC)?

Apparently we are the ONLY parents who set limits. Everybody else's mom and dad lets them play as much as they want. Thats what my son says anyway. It is all he ever wants to do and we are about ready to get rid of it!!! He wants to know what he has to do to earn time to play it more. How should I handle this?

Is there a different set of rules for limits on "social" games, where he's actively playing with his friends (either in person or over the internet)?

YES! Not only is it reasonable, it is IMHO parental malpractice not to limit video games, the internet, and telephone usage.

Clearly, the video games have tremendous value to him. Among other things, that gives you powerful leverage! Use it well.

My practice with video games, movies, texting, and any other similar amusement was:

"Apparently we are the ONLY parents who set limits. Everybody else's mom and dad lets them play as much as they want. That's what my son says anyway... My son is 12 years old."

If I had a penny... Of course your son thinks you're the only parents who set real limits. Who kicks their kid off the Playstation when they've got a friend over?

I was a massive game player when I was 12, and can't say that I regret spending my time in that way, as I've got a lot of happy memories of playing with friends, seeing new imaginary worlds etc.

We believe, like every cognizant being, that progenitors should arbitrate the media consumption of the organisms they create. In other words, parents should parent. One sees this sentiment everywhere. As an axiom, it’s incredibly compact. As a life edict, especially for enthusiasts of interactive media, it’s somewhat more complex.

This is how Gabriel the Younger invests his leisure hours - in the construction and demolition of imaginary worlds. You can’t tell me, or at any rate I will refuse to hear, that this doesn’t have value. I’m not sure that eight consecutive hours of it on a daily basis is entirely necessary, but placing it somewhere along the continuum of Play as opposed to “Wasting Your Goddamned Time” seems reasonable to me.

Do not get rid of the gaming machine. For children who may have trouble socially, it can be a source of controlled social interaction without peer.

However, you are his parents. If you need to regulate his time with the machine, and you should, simply draw up a list of tasks that he needs to do before he can play.

My advice would be to not be too ridiculous about the list. Set it up so he can get it all done, and still have at least an hour's gaming time, otherwise he will (not unreasonably), argue that there's no point in him agreeing to something where the scales are so biased against him drawing on his part of the deal. Also, you'd just be encouraging him to stay up late. 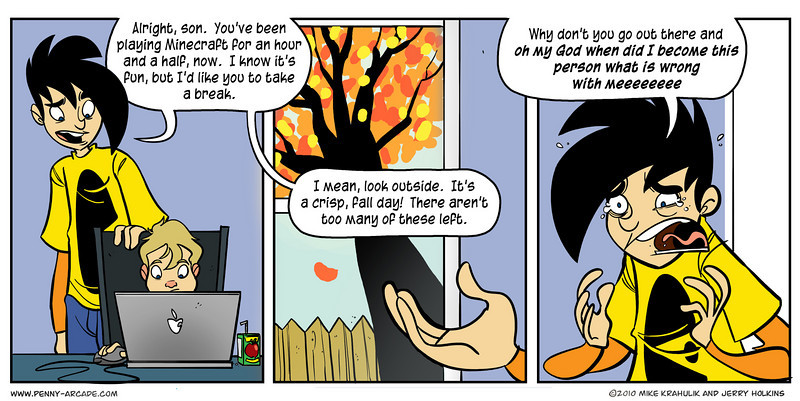 I think everyone's definition of 'reasonable' will be different--not to mention every child's situation would be different.

I think as a general rule, the best would be:

I'll take comic disagreement with DA01, and say that any reasonable person knows what reasonable means.

To answer the question about placing limits, the answer is yes . . . but like everything else, all things in moderation. Limiting after school game play to that magical time between when they get home and when you get home is reasonable. OTOH, Kicking the entire console out the door is not reasonable.

Any limitations should be placed with a dose of realism. The above example of "the time right after school" sounds ridiculous... "They should use that time for homework! And chores!" and that's right, they should. BUT, like most latchkey kids, they're unsupervised during that time. Attempting to impose a limit when nobody is there to enforce it is a setup for failure.

You can easily parent into it though:

You know what you should do? You should do your homework first thing when you get home, then you don't have it staring you in the face to do later after I get home. Now, you know you're supposed to turn it off after we get home and I've noticed you hemming and hawing about doing your homework at that point, probably because you're still jazzed from the game. But if you do it early and get it out of the way, I have absolutely no problem comping you the game later on.

You're being reasonable by allowing them to play while you're not there. It's not out of the question to expect them to be reasonable as well. At 10-12 (preteen yrs) I think it's a good idea to communicate that expectation.

Of course I've elaborated on a single scenario. I think the point is that you can set a limitation that makes sense and is achieveable. You might even discuss some options and come to some kind of systemic agreement with your kid.

As far as getting rid of it altogether, I think that would be a big mistake. For a preteen, it could easily sow interpersonal issues completely unrelated to video games and could develop into a serious, long term wedge issue.

Bottom line: be reasonable with your limitations and you should get a reasonable response.

Some years ago I enrolled to the faculty of psychology and I sat for a couple of examinations before giving up (I couldn't afford to work at day and study at night). I sat for the examination named "Developmental psychology" and I found a lot of useful thing, as a parent, in the studies there were published.

About video games, what I remember is that there are basically three kinds of "hazards":

1) some video games could start epileptic crisis in children that suffer from this kind of problems;

2) children could spend to much time on it, not leaving enough time to do their homework, to go outside and play with their friends, and so on;

3) some video games are violent and at that age they are not yet 100% able to distinguish fiction from reality, so they could do something they do in a video game in the real world also.

According to my studies, these are the three problems connected to video games.

I sat this limit to my son (11yo): no more than an hour a day of gaming. Then, also if it gets 75min. I don't start screaming, but I don't let him play for as long as an hour and a half.

These are my two cents.

16
are there any peer reviewed studies showing the benefits of video games for kids (especially girls)?

5
Enocurage or discourage playing video games to 4+ year old son
17
How to handle different rules about video games at friend's house?
14
Ego-centric kid or control-freaked mum?
11
Do all video games really have to be moderated?
17
How to motivate my extremely lazy 12-year-old?
9
How to deal with children going to friend's houses to bypass rules
3
How to gamify learning?
1
How can I get involved in the parenting of my girlfriend's sister's 5-year-old who spends too much time on screens etc.?
3
What age to introduce video games?