I'm trying to find some Nintendo DS games to encourage two primary-school brothers to get along a bit better. I thought some collaborative games would be good in order to encourage them to work with each other instead of _against each other.

I went and looked at your original question, and it was pretty specific but it was a solid and answerable question. It's unfortunate that it doesn't follow the technical rules of this forum.

Specifically, for cooperative factors in games, you should look for games that disregard individualism, and for the Wii there are plenty. There are many games that have a single score for all players. On the Wii, Kirby's Epic Yarn is a good example as every players pickups go into one big pile (you also can't die so it's great for younger kids). But this is a very rare theme in video games. There are also games that reward assisting in some way. This is less rare, but I don't know of any kids games that do it; the assist is a rather high-minded concept.

It's going to be difficult to find games with these concepts tho. Big Media doesn't really focus on this kinda thing so you won't find it in the ads or other marketing material. You'll just have to muddle thru it. 2nd-hand game stores are excellent for this reason. If a game doesn't hit your mark, trade up.

According to your original title, 6 & 8 yr old boys arent' going to learn collaboration from video games. While they may learn highly abstract things like how to learn a process, how they react to risk/reward and typical action/consequence, they will not learn collaboration from anyone but you and really only with significant interaction. Boys this age will require clear interaction and coaching while playing in order to learn the how-to's and benefits of collaboration. IOW video games won't teach many tangibles on their own, but will support the things that you say to them.

My kids (6g, 8b, 10g) have been playing Terraria and Minecraft for months. These games teach the abstracts I mentioned, but to the kids they're simple and easy-to-master adventure games. Real quick here, these are what they call 'sandbox' games. It's an open world where the player can adventure, build a town from dirt (or wood or stone or diamone) and typically have to manufacture their own tools and goods from stuff you find in the game. My description doesn't do them justice, but I've been pleasantly surprised with how well the kids play together in these games. They are their own community.

For a couple years, my 8 yo has loved playing games with me (46) and my now 18 yo. He likes hangin with the boys. But, as 5-8 yo's go, he played selfish... racing for health when he doesn't need it, getting the upgraded boots or whatever when he's already got a pair etc etc... I had to force him to not play and watch how me and the older one play to watch how we take care of each other in the game because the 18 learned those same lessons from me many many moons ago. It took a while, about a 6mos-1yr before he was able to play cooperatively.

You don't have to interact every time, cuz sometimes it's fun to just play. But if that's all they ever do, they're not getting much.

Bottom line here is that you can get games with collaborative factors, but if you're there coaching and interacting and just being a dad, those technical factors in the game really don't matter. You can teach cooperation in any game; the game sometimes just makes it easier.

Of course, since it's supposed to be fun, you have to do the goofy crap too... like jumping continually thru the game "why are you doin that dad?" "I'm jumpin' rope."

And then they learn things that you wouldn't expect... since the 3 computers are in diff parts of the house, the 6yo is learning to keybroad, believe it or not.

This is a great question which really appeals to me. I am an avid gamer (video games, board games ...) and I feel concerned with how I will educate my kids (18 months and newborn at the moment) with regards to games.

Firstly, I'd like to challenge the question itself. I understand that you want to have your kids get along better in real life. For me competing against someone else usually leads to getting along with him. For instance, when I was 8 or 10, I played competitive chess in an association and made friends my age there. It continued all my life with competitive video games (RTS mostly). So maybe there are some fair games (puzzle games like Tetris come to my mind) which really boast competition but do not lead to a fight.

Then, back on-topic. Cooperation can be more or less direct in games. Some suggestions :

I think you're better off going with specific game examples. Sorry these are old, but any good games with 2 player simultaneous will do (try "let's play co-op" search string ):

Links are to play on youtube. Some of these games have been re-released for the DS, some have not. You said "Nintendo!" Anyway, these are the prototypes of some of the best games I played as a child. 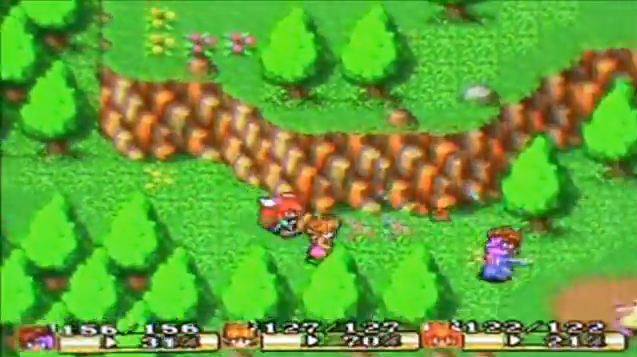 - My #1 recommendation. One of my favorite games. Great cult following to this day. SOM is a fun, longer adventure, so it takes longer to play through, and it's easier to play than Gauntlet (you die/get stuck and have to replay the same levels much more in Gauntlet). 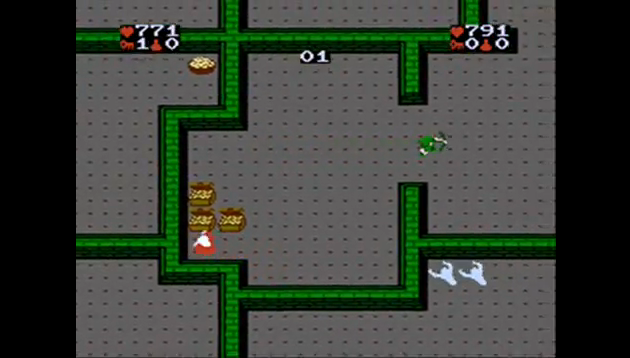 (NES version had 2p simultaneous, DS yet unreleased!) Overhead, 2p simultaneous. I always thought this game was a great archetype of collaboration between 2 players because you really had to collaborate to get through the levels. You have to share treasure and health so the other player doesn't die - having the other player around makes the game much easier for you. This is an arcade style game, the challenge level of this game gets significantly higher as you go through the levels. [See play on youtube] 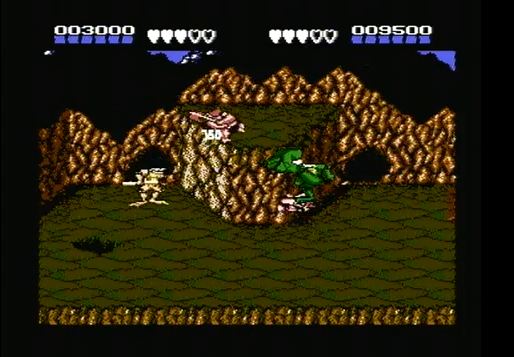 2p simultaneous here is great arcade/action fun. It's basically beating up the baddies, but the play varies a lot with unique twists on 2p side scroller play for it's time (e.g. level 2, going down the crater, and level 3, with the race cars.) 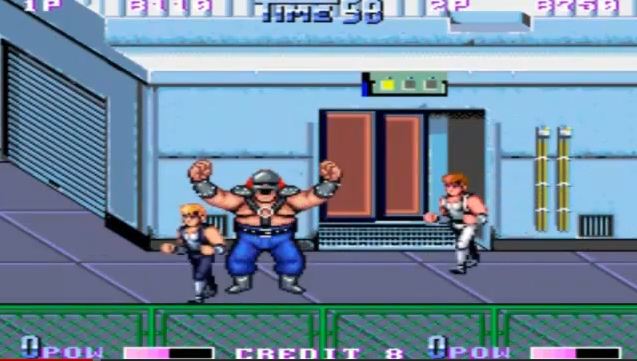 Straight 2p side scroller, have fun beating up the baddies. Beating up baddies with your side kick is fun! 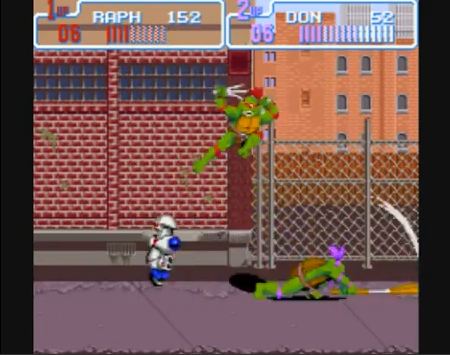 Link is to TMNT IV, but II also had a multiplayer simultaneous mode. Again, beating up the baddies. Same mechanic as Double Dragon.

Contra I, II, III all were well known multiplayer simulataneous (this is the SNES contra 3) 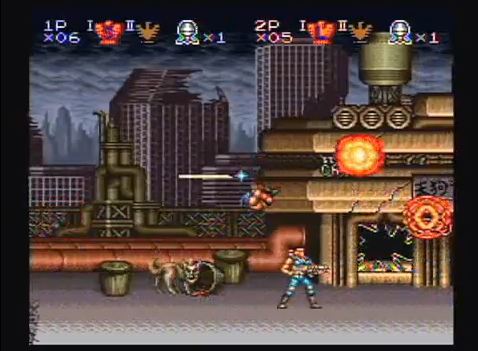 Artillery-based 2p action side scroller. You have to share the powerups that drop throughout the level. Having long range firing weapons is a completely different feel than street fighting (ala Double Dragon), you cover your friend by protecting him from enemies with your bullets! 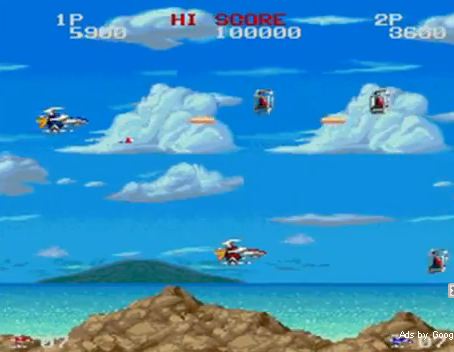 A more off-beat/less popular one, 2 player simultaneous jet fighter. Similar mechanic to Contra, only you can move vertically as well.

KEEP IN MIND A 2P SIMULTANEOUS GAME DOES NOT MEAN FUN TIMES FOR EVERYBODY!! The kids might still fight if one "sucks" or holds the other one back, which is pretty much the cause for arguments on the sports field as well.

What I do is discontinue play for any activity (soccer, water guns, you name it), once they start fighting in a bad (kicking, screaming) way. Tell them to stop, and if they don't stop immediately, then stop the game (until the next day, the punishment has to stick). Once you do that a couple of times, getting them to stop is easier. Once they learn they have to play nice, or don't play at all, usually collaboration follows.

Not the answer you're looking for? Browse other questions tagged primary-schooler video-games or ask your own question.

14
are there any peer reviewed studies showing the benefits of video games for kids (especially girls)?
11
Do all video games really have to be moderated?
3
At what age child can get a game console?
10
Can having a computer game temporarily go blank when kids are too loud have adverse emotional effects?
17
Is it ok to play a computer game with a 3yo
5
At what point does confidence become obnoxious over-confidence?
181
How to deal with excluding my son from the favourite activity of his peers?
2
Teaching an 8 year old that he doesn't always get to dictate exactly how we play?
5
How can I curb my (and my older brother's) game addiction?