Is there any research on the effects of PG cartoon violence on small children?

Our son is now at the age where we let him watch a moderate amount of children's videos to entertain himself -- all firmly G rated stuff.

I have also been allowing him to watch some recent animated features such as Cloudy With a Chance of Meatballs (PG) and Megamind (PG) and the Incredibles (PG), with mild levels of cartoon / action violence.

I also rented some classic "Looney Tunes" and "Tom and Jerry" cartoons, remembering how much I enjoyed them as a child. But after auditioning a few, I was kind of shocked how much actual, real cartoon violence they contain, and I quickly backed off those. You see where Groening got his inspiration for the Itchy and Scratchy parody from, it's shocking how violent old cartoons really are! 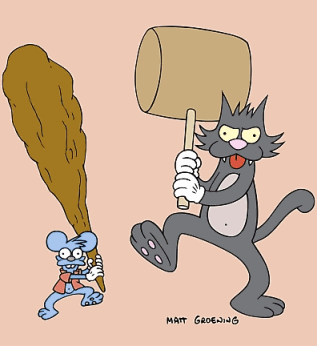 However, even at the MPAA PG level, I am worried that I might be exposing my son to too much cartoon violence, and I am concerned what effects it might have.

(Note that I am not asking for the effect of no video, just how risky is it, per any published research on the matter, to deviate from moderate amounts of children's videos at G versus PG)

Some google-fu got me to the paper Cartoon violence and aggression in youth (pdf) from 2006:

Ohhh man! This is the oldest question in psychology. How violence affects our children. No matter what, like TV, or video games, or whatever.

If you want some research material on this subject, just look at the Google results for how violence affects children.

Now. Let me tell you an answer for this.

When I was studying psychology I had tons of surveys dealing with this problem. But the end result is always the same. It's about YOU!

You as parent must CLEARLY define the boundries between reality and animation / tv / whatever. Clearly I'm not saying that you should let your child watch a Japanese animated blood and gore serious like Blood+ or Naruto. You just have to wait with that.

There is an old saying. Guns don't kill people. People kill people. This applies here too. He won't get agitated if you won't let him. It is the parents responsibility. Many of us don't think so.

Now don't get me wrong!! I'm not saying that the just should watch a horror movie right away!!!!! I'm saying that it wont hurt his ability to comprehend violence if you let him watch a Loony Toons movie.

If you want to know what effect watching cartoon violence will have on your children, you need look no further than yourself. As you said, you watched Tom & Jerry and Looney Tunes as a kid and you loved it. But you don't seem to have even remembered all the cartoon violence, (let alone been turned into a violent person by it,) or it wouldn't surprise you when you watched it now.

There is a wonderful book called Killing Monsters by Gerard Jones. It was a paradigm shift for me in terms of children and violence. He discusses the research and the value in allowing children to have fantasy violence in their lives. If you take the time to delineate between fantasy and reality (one of the chapters in the book), all will be well!

Not the answer you're looking for? Browse other questions tagged violence or ask your own question.

39
How do you decide if a movie is suitable for young children?
3
Should I expose them to cartoons of the past?

6
What should we teach our children about violent attacks like the ones in Norway on 7/22/11?
28
Can a punishment be devoid of any "violence"?
43
How do I explain the reasons behind protesting and rioting to my children?