At what age should a child be able to differentiate basic homonyms in writing?

This may be similar to At what age does the child start understanding the difference between the spoken words which have different meanings but sound same? but from a slightly different angle.

At what age should a child be able to use correctly in their written form the homonyms "there", "their" and "they're"? That is, at what age ought a child of normal ability, in a 'native, first language' English school, be able to differentiate terms such as these in their writing, and how to recognise if they're 'late' in learning this?

Some otherwise brilliant adults never figure out English homonyms, but in the national spelling bee you will see young children breezing through them as if they are nothing.

There is an interplay between raw linguistic talent and practice that appears to have little to do with "intelligence" in the classical sense of the word.

However, I have found out useful to gamify homonyms - by 8 years old most kids get the humor behind using the wrong word that sounds the same or similar. When they can make the choice to be humorous or not, they are we on their way to understanding and being able to appropriately use different homonyms.

At what age should an adult be able to differentiate basic homonyms in writing? :)

Quite seriously, spelling (homonyms or not) is not a subject in which everyone eventually gets A+. Consider textbooks like that of Coffin et al. (2002) on how to make sure undergraduate university students understand things like this: 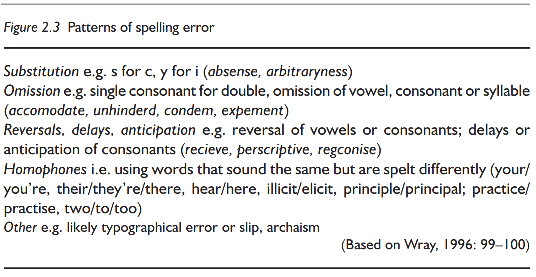 Compared with spoken language, writing is artificial and abstract, more than you might think if you haven't tried to teach it or study language acquisition. Writing homonyms correctly depends on a few different skills that a child gradually acquires; this list is not exhaustive:

First, consider these steps of abstraction and arbitrary rules that every kid has to learn in order to learn to read and write. They start out not even being able to respond to prompts like: "Take the first sound out of plump. What word do you get?" because they don't have the phonological awareness to decompose a word.

Then, pause on that last step with me. My "color/colour" example is meant to get you to remark how trivial it is that a word can have multiple spellings. I mean, it's still the same word, right? Who cares if it has a "u" or not!

Now consider that this actually describes the case of homonyms. The child knows the word /ðɛə(ɹ)/. They've used it fluently in many contexts since they were not much more than a year old. Now they learn that it has three different spellings: "there", "their", and "they're".

To make matters worse, the rules for when to use each one are not child's play, no pun intended. It's not a tidy geographical thing like adding "u" if you're in the UK. It suddenly requires one more step that most adults never master:

Those points of grammar are not easy. Even if you just do it based on things like apostrophes, you run into hurdles. An apostrophe marks the possessive in John's, but the lack of an apostrophe marks the possessive in its, where the apostrophe instead marks a contraction (it's). Confusing? It's a small fragment of the system teachers have to get straight in a kid's head by the end of Grade 12. Gradually, most educated people do get a sense of when to use each homonym, but probably could still not articulate the rules.

It's not going to happen smoothly for everyone. Graduation doesn't require getting an A+ in spelling in every grade. And misspelling rarely hinders understanding, even if it's annoying to proofreaders. As such, there are few serious incentives to master the system. People here could give you an ideal target (maybe between Grade 5 and 8?) but it depends on far too many factors to be useful.

Not the answer you're looking for? Browse other questions tagged education or ask your own question.

6
At what age does the child start understanding the difference between the spoken words which have different meanings but sound same?

6
What cartoons teach basic math?
13
At what age or developmental milestones is a child capable of critical thinking?
2
How old should a child be to start creative writing?
11
At what age we should tell our toddler to not kiss everyone who asks her to?
6
What is an effective order to teach writing the alphabet?
7
At what age do children usually learn to write letters of the alphabet?
4
My 11-year-old hates writing as do I. How to provide help to him writing a school essay without forcing him to do what he doesn't want to?
1
What is the youngest age a child can learn the violin?
5
At what age child naturally stops asking "Why?"