Is it inappropriate for young teens to cuddle and sleep together if there is no sign of it being sexual?

I'm trying to decide if I should intervene and would very much appreciate some feedback. I am Japanese btw and my English may not be perfect, sorry.

My son and his best friend are both 13 years of age. They have been best friends since a very young age of around 4. They have a good group of friends, but the two of them have been almost unseperatble for years. She is a very good influence on my son and he tends to do better in school, clean his room, etc, when she is around. So I want to be very careful about not hurting their relationship. Especially since he has been self reliant since a young age, like many Japanese children learn to be my our culture. They have always been lightly physical, wrestling, leaning on each other (I think normal healthy friend ways). But recently I went into his room one night because the light was on, and they were sleeping together (with clothes on) in a very intimate way. 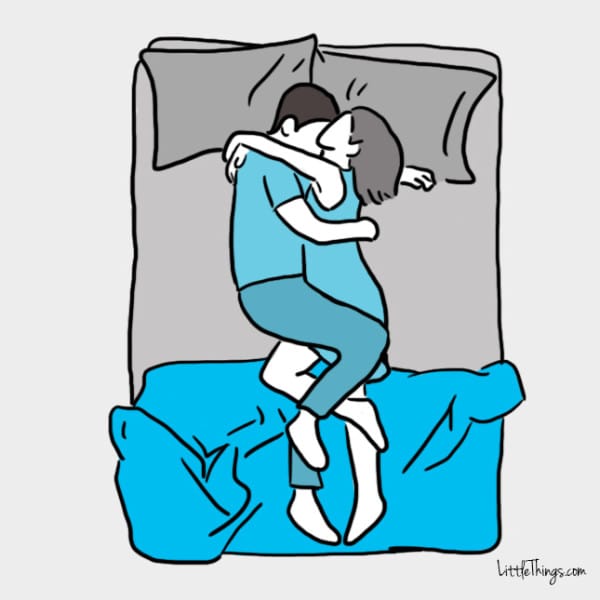 Very much like picture I have posted. They looked very cute and peaceful like this, but I was little scared as it reminded me of lovers.

I have been watching them closely, and they are very comfortable together, and will cuddle on couch when watching tv, things like that, but I have seen no kissing and nothing sexual. My son gets embarrassed though if I get too nosy. I do not know if they are developing love or if they are just comfortable like siblings. I want to find what is best for them, and do not want to force them to stop if it will hurt their relationship.

I wouldn't worry too much, and I definitely wouldn't suggest doing anything about it.

First of all you don't know that the two of them meant to sleep in an intimate manner. They may have fallen asleep separately and then ended up closer together as they rolled around in their sleep. As someone who has had to share a bed with a young child I know they do tend to end up curled up around you no matter how you fall asleep. Especially if they were sleeping on a small bed, (which I'm guessing they were, since I doubt you bought your son a king sized one), how close they were in bed probably has little to do with any intentional intimacy. It was also a one time thing, and I wouldn't read too much into a single incident if it runs counter to what you have seen every other time with them.

If we were to ignore the one example of the bed you don't have any real sign of anything other then a close friendship. You said you saw nothing romantic, and that makes sense to me if they have been friends since age of four. Children who have been friends at such a young age are unlikely to end up in a romantic relationship, due to the Westermarck effect. The effect is basically an evolutionary instinct designed to avoid inbreeding by making it unlikely that someone will find anyone they knew as a young child (under the age of 6) romantically/sexually attractive later; since those they grew up with were more likely to be siblings or other close family. The effect is not 100% foolproof, but it does means that it's less likely the two of them would end up becoming romantically attracted, which is again in keeping with your observation of the two of them.

Thus I'd say I see no reason to think there is any kind of romantic concern, definitely no reason this is going to be leading to making out or sexual encounter. As such I see no reason to get between two close friends or complicate their friendship with odd rules or implying there is anything wrong with that close friendship. The only thing you would accomplish is making them feel awkward, or possibly make your son less comfortable speaking with you about real relationship/sexual issues later if he thinks you are so unreasonable about relationships as to interfere with his friendship 'for no reason'.

Separate from that even if you did notice a potential romantic attraction I wouldn't suggest you do much. Your child is going to be attracted to someone at some point, he will make googly eyes and cuddle with her (or him), and you may not like the thought of a 13 year old having a girlfriend like that. However, there is only so much you can do to regulate your son's relationships, which are ultimately something he needs to learn for himself.

You can set obvious and important rules, such as that he shouldn't be having sex at 14 and so you don't want him sleeping over at his girlfriends house unsupervised. However, outside of a few obvious rules like this it's usually best to be less disciplinarian, who sets a dozen rules for behavior rather or not your son likes it, and more confidant your son feels comfortable coming to to discuss his relationships with.

My experience with teens is they often as they get older they start to lose trust in parents, convinced they know better and their parents just don't 'get' what it's like to be their age. Some of this lack of trust is because in truth parents can be unwilling to let go and trust their child to make their own decisions, instead trying to force sometimes unreasonably high expectations of behavior (can you honestly say you have never done any of the things you would demand a teenage not do?). The more their parents try to inflict too strict of rules on teens the more likely a teen is to start to dismiss the parents and their rules as unreasonable. When this happens the kids become less focused on following the rules because they believe it the right thing to do, and more willing to ignore or circumvent their parent's rules. This is a problem because as your child ages your ability to enforce your rules on a teenager's behavior decrease and you need to rely more on the child's honest intent to abide by the rules you set.

For this reason I feel it's important to make rules for teenagers (especially as they get older) as reasonable and lenient as possible while still ensuring good behavior. This helps ensure the teen trusts your judgement (because he understands why the rules exist), and is not so stiffed by the rules that he feels he has to revolt against them to do anything. This help ensure he will choose to abide by them when you are not around rather then using his increasing independence to break your rules.

Thus even if there was a reason to think there was something more then friendship between the two there isn't much I would recommend you do besides making sure they didn't spend too much time unsupervised together. I'd argue a fully clothed physical cuddle, with no further sexual behaviors, with a girlfriend would not be that bad of a behavior for a 13 year old. Something I may not prefer, but not severe enough to risk trying to set rules against it and risk and alienate your son over. It's a matter of picking battles, preventing unsafe sex is important, preventing simple physical intimacy such as close contact just isn't so important as to risk your 'political capital' as a parent on it.

You're saying nothing but good things about the girl. And you're saying that they're starting to discover romantic interest, or at least she is (girls mature earlier than boys). Now, is there any reason you wouldn't want that girl as your son's girlfriend? Obviously, there are things you wouldn't want them to do just yet, but as a long-term picture, you think well of her, right? Let that be your guide then.

At ~13, teens would be just starting to discover romance. Let them enjoy that journey - it is beautiful. Once they are better aware of what it is they are on the cusp of, the awkwardness will come. Things that used to be natural, suddenly won't be. I'd say, the fact that you saw the two cuddled together in bed means they are not yet sexually aware of each other. Perhaps, as @dsollen says, they never will. If they will, you might well see them not cuddling as they used to, for a while. Let them explore this awkwardness, let them learn about this new thing they can feel. Don't interfere.

Now, I'm not saying "ignore everything and let them have sex if they wish". Absolutely, definitely, sooner rather than later, make sure your son has the relevant sexual education - that he knows what sex is and how it works, that he knows about contraceptives etc. If there are taboos surrounding a girl's virginity in your culture, make him aware of that too. You don't want him doing something the consequences of which he doesn't understand. Just don't tie this information to the particular girl - that would make things awkward between them.

You might be thinking "but he's already so close to her, I don't want him sexually active by the time he's 14". In fact, the opposite is true: exploring all this "new stuff" with someone who is already a dear and valued friend would naturally encourage him to be more responsible, more aware of his partner, more attuned to the "friendship" side of romance rather than just the physical side.

Not the answer you're looking for? Browse other questions tagged development relationships pre-teen sex-education sexual-development or ask your own question.

16
Some strategies for maintaining adult relationships separately from children?
5
Is this bullying? Are we overreacting/under-reacting?
24
What to do about the incestuous relationship between my daughter and her cousin?
9
Single parent having behaviour issues with son (11) not wanting my partner around
5
How is my relationship with the siblings of my kid with special medical needs?
5
How do I get my parents to let me vacation by myself?
11
I'm tired of living a double life with my parents. How can I set boundaries with them?
2
Friend kid problem
3
How to overcome a broken relationship with my son?