How can my toddler learn to stay under the blanket at night?

My 2yo son slept in a sleeping bag (see image below) until around 1½ years old, then he didn't like that anymore so we switched to using a blanket. He moves around so much while sleeping that the blanket usually isn't covering him at all. This hasn't been a problem so far during summer, but now the cold season is coming and we think he'll get too cold at night. He's already rather cold in the mornings -- with cold hands and cold feet -- so the current mode of operation won't do.

We're not tucking him in "English style" with the blanket going under the mattress, but average "European style" where it's just draped over him. He's very active and dislikes being restrained, so "English style" is not an option.

I've learned to stay underneath my blanket during sleep, but I have no recollection how I learned it -- can we somehow "teach" him, or does it only come naturally with age? How can we keep him under the blanket? 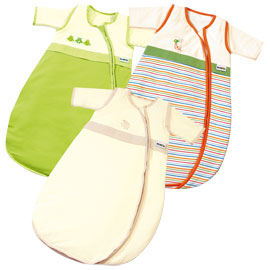 Until she was 5, my daughter would sleep on top of her blanket with her pillow on her feet. She knew about sleeping under the blankets (having seen us doing it), but just wasn't interested.

Dress them warmly and let them figure it out on their own.

The cold will likely teach him quickly. If there's no negative to wriggling, what will stop him? I'd consider dressing him less warmly and seeing if that helps. Maybe he's too warm at night with warm pajamas and a blanket.

That said, obviously don't freeze him; start slightly less warmly and work your way down.

Assuming your house isn't really, really cold at night, having a blanket is a matter of comfort, not of health or safety. Some children (and adults!) prefer it very cool when sleeping. At 2 years old, your son probably can understand the concept of a "warm blanket."

Therefore, I'd recommend providing a blanket and if he wants it, he'll mess around with it until he figures it out. (I suppose you could show him a couple of times how to pull it up and provide tips before going to bed if you want). That's basically what we've done. My two year old daughter sometimes decides to re-cover herself and sometimes not.

And remember, you don't get a cold from being cold; you get it from a virus, so cold season coming up isn't relevant.

When my little one was kicking off her blanket I sewed a strip of velcro to the blanket and the sheet. It keeps her from accidentally kicking it off, but is easy enough to get off when she needs to. Its a little extra work, and might ruin the sheet/blanket for other people, but it might be worth a try :)

Halo sleep sacks come in sizes all the way to 5T if you are looking for large enough sleeping bags. I like the fact that these have holes for their feet in case they get out of bed at night. I do think that children will naturally learn that if they are cold, pull the blanket back up, but perhaps that comes a little later. I really believe in natural consequences within reason, of course and the natural consequence of kicking off the covers is that you may wake up cold and need to put them back on. As long as it is not freezing, it should come about naturally with no harm to the child.

We had a similar issue. We don't use blankets but duvets and the way we tried to manage this was to buy some braces clips and elastic from a haberdashers and improvise some makeshift ways to hold the duvets in place without having to tuck them in too firmly.

You don't say whether you little one wakes you up if the cold bites. If it's any consolation our children still manage to unravel themselves from their bedclothes and if they get cold they probably wake up and tuck themselves back in again.

We use both the sleeping bag and a blanket for our 1 year old. That makes him used to having the blanket, so when we stop using the sleeping bag, it will be less of a change for him.

This has worked quite well with our first kid, which is 4 years now. We sometimes have the problem with him kicking off the blanket, but that is only when it is extra warm, so he gets too warm with the blanket on. Then we tries to find a thinner blanket, or just a sheet he can use instead.

This is a super old post - I hope you got it sorted! What we did was unstitch the bottom of the sleeping bag so his legs could come out the bottom of it, then slowly taught him about the blanket starting lower (just covering his feet) and pulling it higher each night until it was all blanket and no bag.

We buy pajamas in the next size up, and put LO in two pairs of pajamas. The inside pair is his current size, and the outside pair is one size up. It's like a sleep sack he can walk in, and no need to buy anything extra.

We still get this for both our sons, with the youngest we give him feetie pajamas (the ones with attached coverings for the feet), so even if he kicks the blankets off he'll still be somewhat covered. Plus the feeties tend to be very warm, so he doesn't always need a blanket. Although what helps is my wife and I have very different sleep patterns, and get up and different times during the night so we just make it a point to check on the kids and recover them. Space heaters in the room, in winter, help as well as the central air we have. The older one is harder because he never liked feeties, so we just dress him warm and try to recover him.

I don't think you can train them, my boys both are active sleepers, I've seen my oldest change positions to be at a right angle to where he was when he went to sleep. If the cold doesn't stop them, and it hasn't yet, we just try to keep the room comfy for him.

I have same problem with our 2 year old except she takes of her pjs! Iv tryed every way! And iv even done leaving her and watching her during the night and she woke up to cooled don't do this! My partner is medicly trained and was doing core temperter checks hole way through and we woke her and warmed her up. The only thing we can do is while she is in a deep stage of sleep we dress her into a fleaze sleep sute all in one (babygrow style ) and then and her blanket or severel over the corse of the night as she has laid on top of the last one I put on her. she will always kick of her blankets or quit this has mean going most of time. but I know this is not going to help her learn. But I have found that if she sleeps on our leather sofa she says still and warm. I'm starting to wonder if she is to cold from the start. Not her body but the mattress. As when I put her in our bed when she's called out or starts moning in the early morning as we've been asleep for 4 hour. She will sleep fine once she is warm moves ontop of quilt as stays walm. With no problems. So I'm about to change her mattress to a normal child one that reflects own body heat back. As the baby's and toddlers are designed to allow air through so not to over heat and to breath on front to prevent cot death. Let's hope as we can't keep this up.

PipPip
1
2
Add a comment  |
Highly active question. Earn 10 reputation (not counting the association bonus) in order to answer this question. The reputation requirement helps protect this question from spam and non-answer activity.

31
How do I get my 6-month-old to sleep better at night?
11
How do we avoid leaky diapers at night?
11
How can I prevent my 2 year old from covering her face with a blanket when she sleeps?
3
How can I help my 27-month-old, who doesn't sleep at the designated nap time in the afternoon anymore?
3
How can a three month old go to sleep - everything's so interesting!
12
Toddler requires Mom or Dad to stay in the room to fall asleep
2
One year old tends to wake up a lot in the night demanding breast
1
How to make toddler stay in his own bed at night
2
How to wean a 1-year-old of breastfeeding, especially night feeds?
3
Introducing English to toddler later than planned. What's the right approach?