My son is in 3rd grade, and next week all of the 3rd grade classes are going to tour various historical sites in town. I volunteered to do research and give a tour on a local American Indian site. There is not too much recorded history of the American Indians in our town, but one of the main stories is that of a group of American Indians killing a young boy a few hundred years ago. I was thinking of just briefly telling this story because it will fill some time and is specific to the town; I am not planning on discussing details of the death or anything like that. Is this okay for children of that age?

age-appropriate teaching
Share
Improve this question
asked May 31 '17 at 15:17

If it were me, I'd rather they were told a bit about the tribes that inhabited the area (particularly their religious beliefs are liable to be fascinating), how their language relates to others in the area, how they made their living, what other tribes they fought with, etc.

If you are US-based, and not sure who the local tribes were, you might find this map helpful to get you started (warning, its large)

Dwelling on a single violent altercation from over a century ago instead doesn't seem like it would be productive or informative.

Then again, I'm a history nut (second highest rep on the History SE site last I checked), so my tastes probably aren't comparable with a typical 3rd grader's. And I'm not a professional educator, so I don't know much about how to teach history.

I saw in a comment on another post you mentioned that these were the "Pennacook" people. There's a short but informative Wikipedia page for the Pennacook, including some notes about where their modern-day descendants can be found. You could probably dig up a lot more info that would likely be relevant by reading the links on the other "closely related" Abenaki tribes (since they ought to be culturally as similar as you can get). Here's a map of Abenaki-held territory at the time of contact. 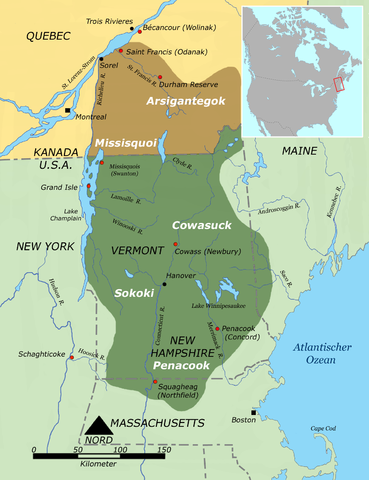 One thing I'd be sure to stress is that these people were settled farmers, not nomadic hunter-gatherers as we European descendants often like to portray Native Americans. But that's just a pet peeve of mine...

The truth is always okay, it's the delivery that matters. Try and see how balanced the story is. Why was the boy killed? What were the conditions the Native Americans were facing? Who was the boy? Specifics need not be detailed, but if he was shot or stabbed, that information will be asked for and it's okay to give it without gory details.

I was in first grade when I was taught about Anne Frank and the Holocaust because I had a family friend who was Jewish. I had read her diary by Grade Three. So death is a topic kids can and should learn about -- but expect questions. (Some questions may seem off-topic, but may not be at all.)

Also remember than some families may have had first hand experiences with war or fear or even death. You may have the child of a refugee or a veteran in the class or school.

I'd be careful to use proper terminology (Like Native American rather than 'Indian' or the proper name for the natives in your area.) I'd also check to see how that same group tells that specific story. Balance and reasoning makes a real 'truth'.

Not the answer you're looking for? Browse other questions tagged age-appropriate teaching or ask your own question.

39
How do you decide if a movie is suitable for young children?
9
What methods are effective for teaching vocabulary to young children?
0
Can anyone name this method for teaching children numbers and basic arithmetic?
14
How young is too young to start wearing makeup?
5
Teaching manners to a toddler
14
How much should you tell your children about your sorrows and joys?
6
Should I start teaching my 2.4-year-old mathematics?
1
Proper approach about teaching to not bully others
6
Why is it so hard teaching your own children and how to improve the process?