How to explain the "brutal" ways of wildlife and nature to a kid and when?

I would like to expose my kid to a lot of different animals quite early on (starting from 2-3 years), mostly through telling them about it and showing photos/pictures. Even though screen would be limited, I would like to show them wildlife shows too, like those on NatGeo and animal planet. (Not a parent yet, this is all just a plan)

But I started wondering if and when this would be appropriate for kids when I was watching one such show with my 3 year old nephew. They first showed a mother owl and her chicks, and how she goes out to look for food for them. He related to that pretty well, observing thats the way things work with people too. Suddenly, a bald eagle swoops down on the mother owl and makes a meal out of her.

He's seen wild animals eating other animals before, and didn't get too worked up over it, though he did seem surprised. But this was different because it had a familial structure that he could relate to. He seemed very distressed as he asked what will happen to the baby owls now, they're waiting for their mother! He was about to cry when I blurted out that this was probably a different owl, and that the mother owl is fine. Disaster averted.

He hasn't had to deal with death yet, but he seems to know that when you end up as a meal to another animal, you're not coming back anymore. Now, when I raise my own toddler, should I wait for him to be familiar with the concept of death and how its the natural way of things before showing him shows like this which depict animals hunting each other? What age/developmental milestone would be appropriate? How do I handle stressful situations arising from this?

P.S: There are many questions on here about dealing with death, but I find that the deaths associated with natural food chain of animals in the wild is very different from dealing with the death of a person or a pet.

I'm going to draw an analogy from Monsters, Inc. The monsters in the movie scare kids in order to make power for their city. One such monster, Sulley, is the best scarer around. He never has any qualms with scaring these human kids, until one comes into his life that he begins to care about. He names the child Boo. As soon as this happens, his friend Mike says

Sulley, you're not supposed to name it. Once you name it, you start getting attached to it.

And the whole movie follows this gang as they try to protect and take care of Boo. Why did Sulley care about this child and not all the others? He formed an attachment.

Much like your nephew. Your nephew was completely ok with the idea that a random owl became a meal. But not that particular "mommy" owl. The use of familial terms, seeing the babies, etc. combined with how important mommies and family is to your nephew, makes that specific owl special. He formed an attachment, so it hurt to see that special animal killed.

So if you want to explain how nature can be "brutal", you need to do it in a context where there isn't any attachment. The child doesn't have to understand death to understand that a fox hunts rabbits to eat. But understanding death and the permanence of it adds an whole new aspect to that conversation.

One of the best places to learn about animals and such would be at a zoo. You can see the animals, read about their diets, etc. But you don't see their prey in pain, you don't see a fox eating a baby rabbit. You get to see and appreciate the animals, but you don't have to confront the issue of killing other animals to survive until the child is ready. (And they will let you know. They will (usually) bring it up.)

The biggest issue here is most likely not the "animals eat each other", which is very abstract, but rather the watching NatGeo, which intentionally tries to make you feel a relation with the animals they are showing.

My suggestion would be not to watch nature documentaries meant for adults with toddlers, because they will get distraught over the fact that these documentaries intentionally try to make them feel sad about what happens to the animals in them.

Instead use material geared more towards children, which will give them the same basic information. Alternatively, visit nature education centers, which likely also talk about this topic but in a less troubling way for toddlers.

My kid for examples knows how owls work and hunt, and she considers it interesting and likes picking the bones out of their pellets and it doesn't distress her that those were actual creatures because she didn't have any relationship with them. But she gets scared when I read from the book of rabbits and they mention the fox, because she does have a relationship with the rabbits in the story and she doesn't want those to be eaten.

We started from the day they were born. We live in a geographical region ripe with the horrors of nature. Rattle snakes, mountain lions, etc, all right outside our front door. We wanted them to know nature was not designed to play nicely or exist next to humans. A snake will bite you. A lion might too. I even painted their bedroom to reflect the horrors of nature in all its natural glory so they would learn to sleep with it as though it was just the way things are and nothing to fear. Here's a picture where you can see some of the animals in what could be considered scary poses - and this is just one part of the wall. There are much more intense scenes all over the room: 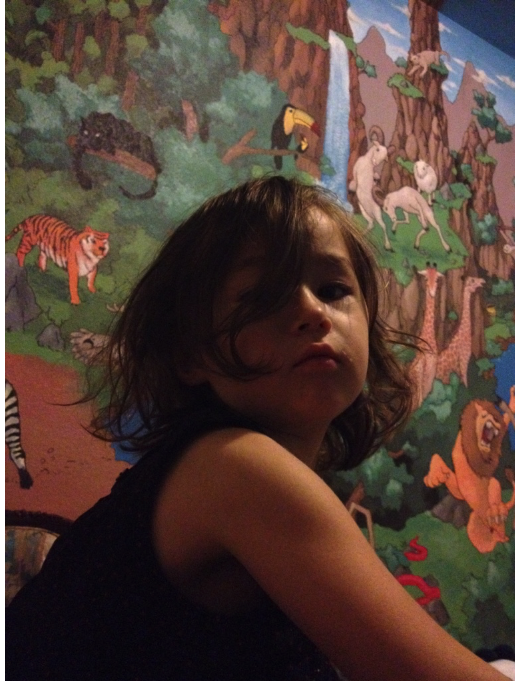 They asked about each one and why they were doing what they did. We told them as best we know, and they've always had nature shows to give them a connection to real life. When they saw the lions attack, they just casually said - oh, like the lion in our room.

Point I'm trying to make is that it's never too early. Nature shows aren't typically horridly gruesome so growing up with the nature channel from day one might be a good segue into a life where the nature of animals has always made sense. Our girls are not afraid of nature and they know to stay away from the creatures that will do real harm. One wants to be a veterinarian now so I can't say it has adversely affected her to know what nature can do to you.

Our "how" has just been to keep them exposed to it and never gloss over the reality of animals, insects, or the great outdoors. We go to zoos, petting areas, which tend to be just goats, sheep, and other creatures not likely to attack, and encourage them to interact with animals commonly kept as pets. Nature shows tend to be ambient in our home, and camping is easily available to us. We sometimes read night time stories about snakes and lizards since there are so many around us. We've never had to scare them away from a black widow or rattle snake, though they have seen them. We explained the animals and that those are the kinds that will do real harm, but only if you mess with them, or walk blindly into their homes. So they've become pretty aware as they play outside.

We never had a point where we hid them from the horrors of nature so we have never had to deal with them being traumatized from seeing something most kids their age may not have seen. Sometimes they even play with toys like the nature shows where lions are eating a zebra. So officially I say just start from day one and educate as opposed to scare. Kids are pretty good at assimilating but they'll assimilate based on how you teach them.

I prefer a matter-of-fact approach and avoid going into too much detail or bringing emotions into it too much.

With the eagle/owl example, if asked to explain, a simple answer might be "the eagle was hungry and needed a little snack". If asked about the impact on the babies, I would say something broad like "I'm sure the babies will be fine" before changing the conversation topic to something more positive, or at least redirect it slightly - "Wow, look what big wings the eagle has! I wish I could fly like that, don't you?" so that the child doesn't get too fixated on the brutality of nature.

Not the answer you're looking for? Browse other questions tagged toddler television death or ask your own question.

26
How do I explain to a 4 year old that our family pet is sick and needs to be put down?
15
How to explain to a toddler when masturbation is appropriate?
16
How and when to disclose to children a parent's suicide?
7
How do you help a primary schooler who is struggling after a death in the family?
4
19 month old emitting short bursts of high-pitched screaming when frustrated
1
Father now, earlier nursery versus grandparents now, later nursery?
2
How to stop a kid from beating head against things when he's upset?
2
How to react when my kid was pushed by other older children without their parents nearby?
5
5 year old loved wildlife documentary but was very upset by dead animals
1
How and when do we start teaching our toddler the difference between rules at our house and others'?