At what age can you detect hearing problems in infants

My baby girl is 4 weeks old. The midwife that delivered her told us that it is very difficult to test the baby's hearing while they are too young. Out of curiosity, I have attempted some tests on my own by making sounds on either side of the infant's head to try and detect some reaction, but do not detect anything. My wife claims that the baby is reacting to music, but I cannot make that conclusion without any doubts.

I would not be too worried about this until I was reminded that my mother was born with a hearing impairment, that was, however, rectified at an early age. But I guess this made me think about it, maybe too much.

Is their any "home tests" that I can perform to confirm that the child can indeed hear?

The midwife may have been oversimplifying information in a way that ended up confusing you.

There is a common screening test that they do with the infant within a few days of birth that can test their hearing without needing observable feedback from the infant (i.e. the startle test or similar); in fact, there are two, the Otoacoustic Emission test (OAE) and the Auditory Brainstem Response test (ABR).

For my children, they used the OAE, which is a simple test that involves making small sounds in the baby's ear and detecting if the inner ear (cochlea) emits a particular sound in response to hearing a sound. This is possible for any age child, including a day or two old (mine both were tested at 1 day old).

What the midwife may have been referring to, though, is that this test has a very high false positive rate, particularly for children in certain birth circumstances - meaning children will appear to fail the test but actually have normal hearing. This happened for both of my children; my first had a borderline failure for one ear, which they retested at 3 months and he passed; the second had a cannot-test for one ear and a failure for the other, both passed a few months later again.

So, it's well possible that the midwife (or more likely a post-delivery nurse) in fact performed this test (if your baby was kept in a nursery and not with the mother, this could've happened without you fully understanding it, though I would've expected you at least sign off on doing the test). If that's the case, the explanation that 'it is hard to test' may have been intended to allay concerns about failing the test (and just poorly explained, particularly if you think a test was not performed).

All that said, I don't know anything about care in South Africa, but this seems to be standard practice in the US.

You have reason for concern; ​​​​​​​​​​​​​​​​​​hearing loss is the most common congenital condition in the United States. According to the American Academy of Pediatrics,

Each year, an estimated three in 1,000 infants are born in the US with moderate, severe, or profound hearing loss resulting in delayed development in language, learning, and speech.

Your midwife misinformed you; infant audiological exams are routine. An infant's hearing can be assessed almost immediately after birth. If your child was born in the US, it is likely that a hearing test was done in the hospital before the infant went home. According to the CDC:

[O]f the nearly 4 million infants born in the United States in 2005, 91.5 percent were screened for hearing loss.

That was 2005. Most states are required to screen for hearing before discharge; more were added since 2005. Check to see if your hospital did a newborn screening test.

It's quite easy to test for deafness at home, though it will startle the infant, and it won't determine the degree of hearing loss. While your baby is sleeping, clap loudly at a distance of about 12 inches. They will startle and start to cry. However, this is not a substitute for a diagnostic hearing exam.

Please see the flow chart (the last reference) for the usual (recommended) protocol for testing. If your child has not been tested, please have the test done within the next few weeks, as it should have been done already.

I don't know who will pay for screening after a home birth in South Africa, but in the US, ~$50 covers the cost of the test.

Not to try and compete with the excellent answer from @anongoodnurse, but merely to add a personal perspective. 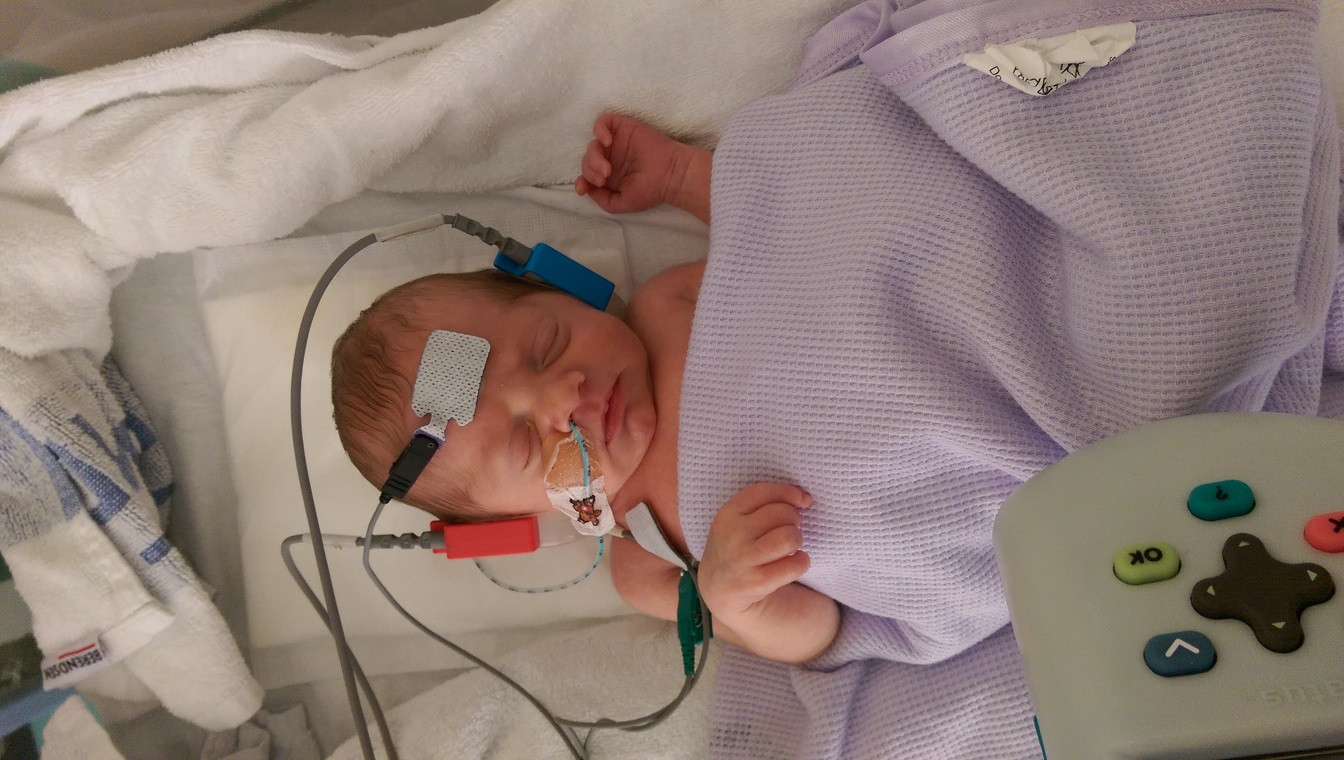 This is my son being having his hearing tested by the audiologist when he was still 6 weeks premature. As mentioned in the comments above, this is a routine test conducted on all babies born in UK hospitals.

UPDATE: The wire on his hand and the tube in his nose were related to the prematurity rather than the audiology test

Not the answer you're looking for? Browse other questions tagged infant hearing or ask your own question.

36
What are the objective arguments against immunizations for infants and children?
14
At what age should I expect my daughter to talk?
13
How do you determine what the age-appropriate foods for a baby are?
8
What is the reason for covering infants during transport?
8
At what age should infants have playdates?
15
At what age can children understand and respond well to discipline?
3
At what age can we expect a baby to be carried in a back pack baby carrier?
6
At what age does an infant start recognizing people?
3
At what temperatures can infants be naked?
2
When can we start give Sugar and Salts to infants?