What to say to a child whose pet just died

I've never met her cat, and I am currently only in contact with her over Facebook. I also don't know her address so I can't send her anything.

It really has to just be something that I can message her.

She also hasn't seen her cat in a long time as she is always travelling for work in case that's relevant. Also I have no photos. I'll only accept written responses as an accepted answer.

I only found out her cat had died after sending her a message that I was holding my cat.

As you can see her typing seems erratic, and she asked me to stop talking about it multiple times, but she is also clearly very upset and I want to console her.

This is an interesting question because it pertains to all expressions of sympathy. I'll presume the dialogue was included to try to make sense of the interaction and her feelings, so an appropriate message can be sent.

One of the more helpful explanations of the principles of expressions of sympathy is that comfort should only flow in one direction, and that is towards the aggrieved. (This was proposed by Susan Silk, a clinical psychologist who developed the model when she had breast cancer.)

It works in all kinds of crises -- medical, legal, even existential. It's the 'Ring Theory' of kvetching. The first rule is comfort in, dump out. [Dump out refers to any feelings you might have that require comfort being given to you.]

Your daughter gets the sympathy. Any statement of yours that requires sympathy or comfort from her violates that "rule". Please see the following (strange) illustration. Though it's just a (strange) diagram, I'm going to adhere to it in my answer. (Although it sounds clinical, I don't mean to sound cold. These are just good, objective principles to follow.) 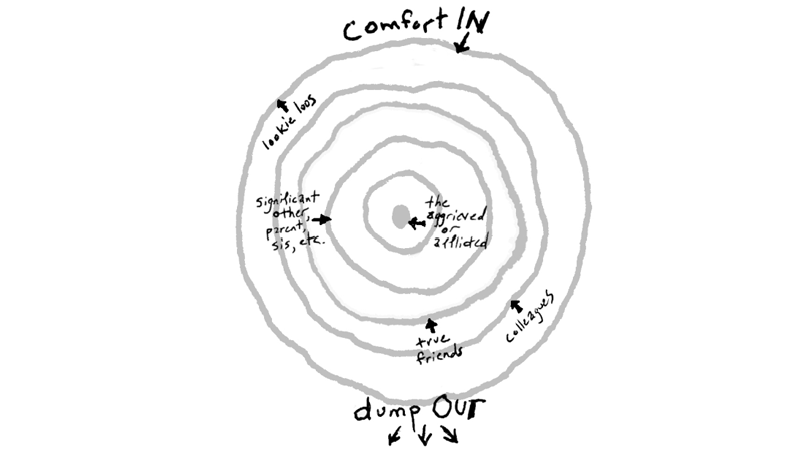 All comfort flows in - toward the aggrieved. All complaints/kvetching/expressions of entitlement/etc. flow out. If someone else needs comforting, it needs to come from someone in a circle outside of theirs.

Who exactly belongs in which circle becomes rearranged depending on circumstances (e.g. an estranged sibling isn't in the same circle as a close sibling.)

"I am so sorry for your loss."

That is a standard expression where the comfort flows in one direction only. It demands nothing in the way of a response except, perhaps, "Thank you." Ideally anything else said needs to be in response to the answer you get from the recipient.

"Thank you" requires no further response.

In this model, your daughter has the right to express concern for herself:

He was such a good cat, and I loved him so much. What will I ever do without him? I feel so lost!

There was an interesting exchange in your conversation that reversed direction of "comfort in, dump out" (actually, there are two, but I'll address the more obvious one.)

That is (unintentionally, I'm certain) a request for understanding/comfort to flow to you from your daughter. It doesn't feel good to the person who is experiencing grief. Your daughter's response was very direct and honest:

She was resisting the request made of her. Some people can handle this with aplomb. But in all honesty, it's a stretch for everyone; the deeper the grief, the harder it is. Seeing as she was just reminded of her sadness, I presume this all took her by surprise (as it did you.) We're often not at our best in that circumstance.

If you want to express sympathy to her again with better results, may I suggest:

I just wanted to say again that I'm very sorry for your loss. I also want to say I'm sorry I made it about me.* It's not about me at all; please forgive me. If there's anything I can do to help you, please let me know.

I don't think anything else needs to be said. Hopefully you'll get other answers with other perspectives as well. :)

It's hard - very hard - to realize when one makes demands from someone in grief, but it happens a lot. A great - and major - example is given in the reference, which I'll include here in an abbreviated form: Susan was hospitalized for her breast cancer. One of Susan's colleagues wanted to visit her, but Susan told her she didn't want visitors. Her colleague's response: "This isn't just about you." "It's not?" Susan wondered. "My breast cancer is not about me? It's about you?" Her friend was putting her needs about Susan's illness before Susan's needs. That doesn't usually turn out well. And the people who do this usually have a hard time recognizing that there's anything wrong with how they feel. Reading the article should really help you understand the way expressing sympathy works.

How not to say the wrong thing

Hi, how are you today?

Or, if you really feel the need to say something.

I wanted to say that I am sorry for your loss. If you want to talk about it, I am here. And if you don't, I will respect that.

In the conversation you posted, your daughter told you to stop talking about it three times, the last time very directly. People deal with loss differently and if she doesn't want to be reminded of it at all by you, even in the form of getting comfort/sympathy/help, I think you need to respect that boundary.

As anongoodnurse wrote, this is not about you, and at the risk of sounding harsh, I would extend that to say this is also not about your need to comfort her. If she feels comfortable and needs your support, let her come to you. If not, don't think that reflects badly on you as a parent or friend. It doesn't.

Some people really need to take their mind off a loss to be able to deal with it at the pace and time they choose for example, and if they are in that state where they just took their mind off it and then get reminded again, it can be painful. Maybe she doesn't want to talk about it with anyone, maybe she wants to talk to someone, but it's not you. That's fine, and again, no reflection on you.

Of course, there is a but of a problem in interpretation here - the "Stop" and "let's just stop" might have been just for that moment, or it might have been an attempt to say that she doesn't want to discuss the topic at all. I am not sure how close you two are, whether you can tell whether she meant the former or the latter. When in doubt, I would err on the side of "not discussing at all", others would choose the other option.

There are two actual questions you could be asking:

You have given information which suggests that your relationship with your daughter is not as strong as you'd desire: a cat you've never known (they have lifetimes generally well over 10 years), you do not know (and apparently cannot ask) her current address, and the only means of communication is Facebook (but if she can access Facebook, there is a high probability she has phone service and you cannot access her by that means).

I do not point this out to be mean to you -- far from it. I point it out to set the context of her view of things.

Death itself is not formulaic, nor is coping with death. The answer to #1 above is, "it depends." The other answers have given good guidance, but there is not a single answer to the question.

Now, for the rest of this answer, I'm going to assume you understood what she was saying in the broken dialog (I wouldn't have initially caught her intention.)

When someone effectively says (for whatever reason), "My cared-about-thing died and I don't want to talk about it", saying, "I am sorry for your loss" is cliché in this day and age: it shows no compassion and effectively says, "I don't know what to say, so I'll apply a rubber stamp response to your dramatic situation."

So, then, how do we say the truth without making the situation worse: that we do not have the words we want, but care so very much? The answer is the truth:

Oh, no! I know there aren't the right words, but when you want to talk, I'll listen.

That 1) validates their emotions, 2) tells the truth, and 3) opens a gateway of communication for when they feel the time is right. Yes, I just gave a single answer to what I said could not have a single answer, but therein lies the "trick"... by saying truly no more than, "I care; talk when you're ready", you provide all the different answers! As has been said by others, the greatest conversationalist is the one who is the best listener.

The assertions that you were focusing on yourself in other answers are erroneous. You were expressing yourself in the best way you knew:

-- at no point were you intending to talk about yourself!

Now, on to answering the second potential question. I wrote "apparently-bungled" on purpose. Emotional people are almost never logical and when the height of emotion passes they are better able to reflect. You have an advantage here: Facebook chats don't delete, so they aren't forgotten or mis-remembered.

The end of your chat, though, ended the chat, so now you will need to open the door again. This, too, is not a one-size-fits-all answer, so here are some suggestions:

The primary idea: talk about something other than the last topic of conversation -- she'll bring that up if and when she wants.

Finally, there is the chance of a "backfire" where she asks, "How could you have been so insensitive about 'Fluffy'?" The answer is always the truth:

I am sorry. I wanted to have the right words and tried to show how much I care, but it didn't go the way I hoped. How are you now? I'm here to listen.

And, then, of course, do as you said: listen -- it's the best thing you'll ever say.

Not the answer you're looking for? Browse other questions tagged parents adult-child pets death or ask your own question.

37
Just found out my daughter might be gay. Now what?
10
Teaching my daughter her pets are not toys
8
First pet (fish) just died. Is there a teachable moment?
9
What can a parent do when his child has an incompetent teacher?
1
Should I cut ties with my child's father?
11
How to help parents cope with me moving out
76
Lying to my daughter about her mother's death
3
How can 17 year old daughter overcome her fear of both parents dying?