frequent awake frequency between midnight and 4am

My little one (14 weeks old) gets sleepy at around 7:30pm and sleeps till about 7am, broken into 3 sections. He is breast fed, no pumping. We have not tried any sleep training. He sleeps in his crib.

The first section (7pm to midnight), he sleeps pretty solidly, might wake up once to feed.

The second section is where we are having the problem. Between midnight and 4am he is awake almost every hour. We usually try giving him the pacifier, and if that does seem to calm him down, we feed him. My wife side feeds him on the bed, because it is impossible to calm him down any other way and get him to sleep.

The third section (4am to 7am) he sleeps through.

We are struggling with him waking up basically every hour between midnight and 4-5am. Any suggestions?

First, the question is wether your child has been sleeping through before this new habit of waking up began, or if this is just a remnant of the early whole day sleep cycle. If your child has never yet slept through for more and a few consecutive days at a time, then he is still learning to sleep at night. If on the other hand he has been sleeping through for a month or two and just began waking up again recently, you might want to go see a qualified doctor. He might have some physical condition that is waking him up (constipation, flatulence, some infection, or some developmental problems) and that you should address.

Second, your child may be spending too much time in bed. On average, a child of 14 months sleeps around 14 hours per day, but it is important to understand that children differ in their need for sleep. Some 14 months olds sleep only 11 hours per day, others over 16. If you subtract the time that your child naps during the daytime, his nighttime sleep need can vary between maybe 8 and the full 16 hours.

Here are the results of one longitudinal study on sleep behavior: 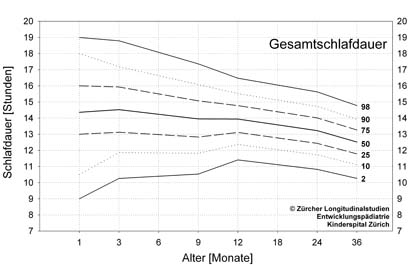 All of this variation is normal and healthy. So maybe the 11 1/2 hours between seven thirty p.m. and seven a.m. are too long for your child to sleep through. You could try bringing him to bed later or waking him earlier or reducing his day time napping, so that he is "tired enough" to sleep through the night.

The third idea is that your child feels alone. Babies are made to feel unwell or unhappy when they have no physical contact to their parents. It is a natural reflex, probably stemming from when it was dangerous for a small child to be alone, as it might get eaten by a predator. That is why children often cry when they are put in a buggy and immediately stop and fall asleep when you pick them up, only to start again when you lay them down again.

In our culture it has become the norm that children must "learn to sleep alone". There is quite a lot of debate about this, and there is some indication in psychological studies that children who are allowed to sleep with (one or both of) their parents are more emotionally healthy than those that are forced to sleep alone despite their difficulties to do so.

That your son can only be quieted by being given the breast of his mother shows that it is this contact that he needs. He might sleep through, if he were allowed to sleep in your bed and was able to feel your presence when coming into shallow ("half awake") REM sleep phases.

Lastly, something might wake him up and keep him awake. Often children react to their parents' stress. So if one of you is having trouble at work, this might affect your son's sleep. Or maybe now that winter is comming you have begun sleeping with the window closed, and the stuffy air is causing a headache in your son. Or waking up would be short, but you turn the light on and carry him over to your bed to feed and then back to his bed, and all this "day time activity" is making him wake up completely and think it is day.

All in all, I'd wait a week or two to see how this develops. If there is no change, I'd begin from the bottom up: change how I deal with him waking up (no light, no lifting around, fresh air, etc.); let him sleep with me; shorten his night; see a physician.

9
Why has my infant suddenly changed her sleep patterns? Is she teething?
14
How can I get my toddler to sleep later in the mornings?
5
7 month old is waking up frequently to be picked up
3
Short naps and frequent night wakings
2
4 month old waking frequently during first half of the night
1
Trying to eliminate night time feeding, end up waking hungry very early
4
Getting used to Stomach Sleeping
3
Frequent night wakings - what can be done to help a mobile poor sleeper