8 month old not babbling, when to worry and what to worry about

My wife and I have two boys: a 3-yr old toddler and an 8-month old infant. The toddler is doing extremely well with all physical/motor and emotional/intellectual/communication aspects.

My 8-month old, physically, is also right where he should be. He's crawling, sits up by himself, is starting to pull himself up on to things (yikes), rolls over, picks stuff up with both hands, etc. No concerns there whatsoever.

We also have a copy of the de facto standard, Baby 411, which cites a whole slew of autism screening questions, and again, absolutely no concerns on the autism front: he makes strong eye contact, enjoys being around us and his older brother, cuddles with stuffed animals, is not "off in his own world", etc. No concerns.

What I am becoming concerned about is his language/communication skills. This is one area where we've seen relatively no development since he was a newborn. On one hand:

But, on the other hand:

If you ask the Google Gods "8 month old not babbling when to worry"-and similar queries, you'll get an ocean of blogs and forums of parents with identical stories to ours. And in almost every case they get the same regurgitated/canned responses:

All babies are different and acquire skills at different rates.

Yes, I understand that, but: if my son is still not verbal at, say, 30 years of age, clearly something is wrong. So my point is that, at some point between 8 months and 30 years of age, he'll cross over a barrier where it's no longer acceptable to just chalk his lack of communication up to "All babies are different."

So my question(s) is:

About 3 weeks after posting this question, my son started babbling and using consonants (of course!). He's now 11 months and jabbers/babbles constantly, says "Da!" when he looks at me, and occassionally acknowledges my wife as "Mom!" (lol). So he's not quite at "Dada/Mama" yet, but I have faith he'll be there soon. I'll post updates to this from time to time as I think it may help other parents.

Our little guy is 18 months old now and is exactly where he should be on the milestone chart (below, under the accepted answer). He barely made a noise for the first 8 - 9 months, then started becoming more and more verbal in his 9th/10th month. And now he's got a repetoire of dozens of words that he says with correct annunciation (more or less) and under the right circumstances. He's even starting to put 2- and 3-word sentences together (I love you, etc.).

All this to say, that we're no longer even remotely worried about him, and I advise any other parents with the same concerns that we had to read through all the answers to this question. The accepted answer was truly the best, but many of the other upvoted answers provided a lot of great guidance and emotional support.

This is a clip of the Denver II Developmental Milestones checklist: 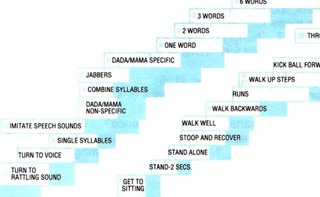 If you draw a vertical line from the slash in dada/mama specific and the "c" in dada/mama non-specific, you'll have the 8 month old line.

The white rectangle is "average"; the blue one means "late but still normal". Falling off the blue box means "possibly prudent to follow-up". There it is in black, white, and blue. Your baby is fine, because he says "aaaah", which is a syllable.

You're asking for a black and white answer (exactly where between 8 months and 30 years), but the truth is, there is no black and white answer. There is only the whole picture. One study tried to correlate infant language acquisition milestones (as well as the other three categories of acquisition) to later cognitive ability, and failed pretty spectacularly.

The age of reaching developmental milestones was associated with intellectual performance at ages 8, 26, and 53 years; for every month earlier a child learned to stand, there was, on average, a gain of one half of one intelligence quotient point at age 8. Speech development had a small but statistically significant effect on subsequent educational attainment (later developers were less likely to progress beyond basic education); this effect was not apparent for motor development. Effect sizes were reduced when the slowest developers were excluded, but many effects remained significant.

Here, "significant" is clearly in the eyes of the researcher; the truth is there was no conclusion except this may be important, but we're not at all able to prove it.

There is no age-specific correct answer to your question. Fortunately or unfortunately, it depends on all the other pieces of information available.

What some causes are for lack of communication is, I think, a separate question.

Development checklists. Phooey. You can never really know what is right for a baby.

...but as a parent, it can sure make you wonder!

I've got lots of kids, and even more nephews and nieces. So far they have all turned out well. So let me give you a few drastically contrasting histories.

First daughter: Never crawled. Not once. She sat up on her own at about 5 months, but not by the half-rolling sort of way babies normally do. She would push her upper body with her arms and scramble her legs forward until they were forward of her hands and plop down like a monkey. She would then usually topple over until she was almost 7 months old. She babbled incessantly, played with noises and was intensely curious about sounds. She spoke well formed words before she was a year old and had an amazing grasp of Japanese and English grammar before she was 2 (I live in Japan, hence the two language thing).

Second daughter: She didn't care much about sitting up for a very long time, and only crawled a little bit. Instead she would look at where she wanted to go and roll there. Which was hilarious, but a little alarming -- until my mother told me I used to do the exact same thing, and so did my brother's daughter in Texas. She wasn't interested in sounds at all. She made almost no babbling noises, very rarely vocalized anything, and didn't even cry much. When she was a little over a year old, though, it was clear that she understood what we were talking about when we addressed her -- but never spoke. In contrast to the first daughter we were a little worried, but figured it would turn out however it would turn out. She didn't say much until she was about 20 months old. Once she turned two, she just suddenly started saying full sentences. We don't even know what her first word was. It really seems like the first thing she said was "I want a banana." (well, actually バナナが欲しい -- but the whole family has an internal pidgin at this point, so it doesn't matter.)

Niece: Noisy as anything. Difficult baby. Crawled, rolled, played with anything that wasn't a toy... but was never interested in sitting up or standing. She was really noisy, but never made more than random babbling noises until she was almost three. Then, suddenly, words started coming out.

Nephew: Textbook example of the roll/crawl/stand/walk system laid out in the "this is a normal baby" type books. But never said a word. Barely even cried. Didn't play with sounds. Liked to bounce with music, but just never vocalized anything until he was almost four.

Now I make my point

All of these kids took (or are taking) their own path. They have all turned out just amazingly well. Super capable kids. Every one of them is engaging, intelligent, and doing well in studies and athletics (typical caveats about kids not enjoying tedious tasks apply, of course).

As you have more kids the differences will stop making you worry and start making you laugh. I've got kids 14, 10, 9, 5, 3, and 0, and the nephew above is now 10 and niece now 8. They are all doing just fine. If something is really wrong with them you will notice and it won't be ambiguous. Sometimes something that is really wrong will only turn up later, like when engaging in early study or trained athletics (around 4 or 5). Until then unless something is just clearly scary wrong then you have nothing to worry about. If you're worried, but not about anything specific, just generally wondering, go talk to a pediatrician or (even better) your mother or grandmother.

Its an adventure. Nothing you mentioned in your story is anything other than good comedic material for later in life.

I just wanted to add a slight counterpoint to zxq9's answer, as I'm not sure it's correct that if something's wrong it won't be ambiguous. There are plenty of conditions that only become obvious when the ability gap between a child and their peers has widened quite a bit, but which could be handled better if the child was given some support before then. A quick look at SEN parents' forums will show that it's common for parents to say things like "If only I'd acted on my suspicions when she was younger rather than letting it all come to a head" or to be annoyed about being fobbed off with "He'll grow out of it, he's just younger in his year group" etc by kind people trying to be reassuring when actually the child was showing early signs of a learning difficulty and could have done with some help.

So while I agree that it does sound like your baby is fine and just doing things at his own pace here, I'd also like to point out that if you still have concerns a few months down the line, there's nothing wrong with getting the opinion of a speech therapist. If your baby does have a problem, getting it diagnosed early could do a lot to prevent it becoming a big problem, and if he doesn't, no harm done.

I'd like to chime in and answer your original question. You wanted to know the cutoff point between birth and say 30 years of age at which there's a real problem. I took cultural anthropology in college and one of the things we discussed was feral children who were raised with wild animals, etc because their parents dropped them off in the woods or kept them isolated from human contact. One piece of information we learned was that if a child doesn't learn to speak by 6 years of age, they never will. There are two centers of the brain that need a pathway for communication between them: the wernickes and brocas areas. These two centers of the brain are responsible for speech and syntax. If this pathway is not developed properly, speech is not possible.

Not the answer you're looking for? Browse other questions tagged infant language-development hearing or ask your own question.

6
How can I get my infant to stop biting his lower lip?
10
Should I be concerned about my 10-month-old still not knowing how to pronouce words, just saying "er...er....er..." instead?
7
Should I be concerned about my 12-month-old not understanding what we say?
10
How to get 2 year old to vocalize words?
4
What is normal for 4.5 month old sleep patterns?
1
Shrieking crying 6 month old
2
1-month old son cannot sleep peacefully
9
How to help a 2-year-old settle in day care where a foreign language is spoken?
20
What can I do to a 6-month-old child so she ends up smart and has a high IQ?