What's a good age for a “penny skateboard”?

My two kids, ages 4 and 6, are reasonably active and coordinated. In general, what is a good age to get children started playing on a skateboard (such as a "penny board", a cheap and small skateboard)? Or, if there are parents here who have young kids on skateboards, at what age did they start?

Rather than starting out with a skateboard, you might want to start them on something one level easier? A kick skate is very popular and relatively cheap to come by, and has several advantages like a handle, easier steering, less risk of flying backward headfirst.

When that is mastered, then the skateboard could be next - if it's even interesting at that point. 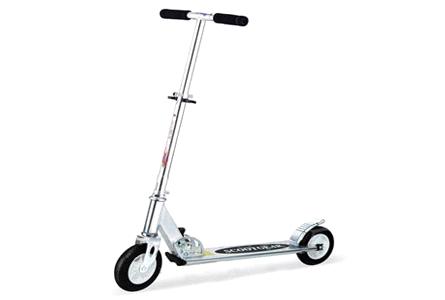 The American Academy of Pediatrics (AAP) has the following information about preventing skateboard and scooter injuries:

Young children may be at high risk of injury from skateboards and scooters because their judgment of their own skills and strength is often poor, as is their ability to judge foot or vehicular traffic. Their center of gravity is higher than that of older children and adults, their neuromuscular system is not well developed, and they are not sufficiently able to protect themselves from injury. For these developmental reasons, children younger than 5 years should not ride skateboards, and those between 6 and 10 years of age should be closely supervised while skateboarding.

In addition, they suggest:

The American Academy of Orthopaedic Surgeons (AAOS) agrees on the age suggestion, and breaks down the age reasons in a little more detail:

Skateboarding is a special risk for young children because they have:

The AAOS also has suggestions for learning to skateboard (on the same page) which would probably be particularly useful when introducing young children to the sport.

Since doctors' recommendations are sometimes pooh-poohed as overprotective and unrealistic, I also found a blog post by a kids' skateboard store. They essentially confirm the medical professionals' stance: nothing is lost by waiting until 5, when a child's development has reached enough milestones that they are better able to control the board.

Not only does this keep them safer from injury, but they're more likely to enjoy the skateboard if they can direct it easily and aren't falling frequently.

Not the answer you're looking for? Browse other questions tagged sports play or ask your own question.

9
Should I allow my child to participate in dangerous sports?

10
What activities/sports are optimal in developing body awareness in children age 4-5?
8
How can I get my 12-year old physically active or into sports when he's never been?
6
Encouraging older brother to play with younger brother
6
Is jogging an appropriate activity for a pre-adolescent child?
2
Could you recommend some suitable martial arts to teach to a child for self-defense?
17
What is a good physical activity for a seven-year old who loves falling down?
8
How competitive or forgiving to be when playing games against my own kids
0
The children are making home messy
4
What age should you start enforcing board game rules?