How to teach a toddler to draw?

The child is 2 years old.

She is very much interested in story books. She can count perfectly till 10. She can recognise the objects and animals perfectly. She could hold pen in very proper way since she was 1 year old.

Now, 2 days back, she has shown an interest in drawing. She knows how to draw a straight line and a circle, though not very perfectly.

The problem is that she wants to draw animals and objects. She keeps on telling me to draw monkey, baby, snake, table, rat etc. I comply, and yesterday I asked her to draw herself all these things. She complyed. But all she could draw was a tiny scribble or a line. She called her drawing monkey.

She kept on drawing scribbles and kept on calling them different objects - repeatedly, until she got really frustrated and threw the paper and pen.

I could read that she knew what she was drawing was nowhere near what I could draw and that was the reason of her frustration.

She she started again telling me to draw things and refused to draw them herself.

What can I do to teach her to draw the kind of drawings she wants?

Of course 2 years is quite early to learn that kind of stuff but she is utterly interested.

Children will go through a variety of stages of development with regard to drawing, including a stage of scribbling1:

Kellogg (1967), in her studies of the children's scribbles, has show that children universally proceed through the same series of stages in their early art development. The approximate life cycle of scribbling begins at age two, or even earlier, and extends through ages four and five.

Drawing Development in Children has a good chart with some examples taken from two experts on the subject.
Zero to Three discusses some of the stages in more detail.

The stages discussed on the pages are taught or touched upon in art classes, child development courses, and some types of psychology classes.

Your child would be considered to be in the Scribbling Stage or Placement Stage. What's exciting is that you mentioned she's naming her scribbles now, such as calling one "monkey". Viktor Lowenfield, in the first citation above, says: "Soon they begin to name scribbles, an important milestone in development."

Now, there are ways to encourage her to continue drawing that hopefully don't lead to an outburst of frustration because of physical limitations. Some of these suggestions are from Zero to Three, or any number of websites. Others are my observations as an artist and a father.

Draw regularly, and make it play, not work

Drawing is an exercise, and can easily begin to feel like work. Your child is exercising their body, as they development fine and gross motor control, and they're exercising cognitive processes as they're trying to express themselves in a physical, visual format.

One of the best ways to engage someone in learning and exercise is by making it fun and interactive.

Here are some things we do with my son:

Also remember to realize your child's limitations. Even fun activities stop being fun after a time, and the brain and body will need a break. It'll be better to switch gears and provide the break as soon as you sense your child becoming frustrated.

One of the most frustrating things for any artist in when you draw a specific object or concept, and then someone comes along and asks if it's a different object. It unintentionally sends the message of, "You must not have done it right, since I couldn't recognize it."

I think even toddlers can feel some of this frustration. Here's how I'd mitigate it:

Use a variety of materials

Even fat, toddler-oriented crayons and markers require grip and dexterity that can be difficult for young children. There are 35 muscles between the forearm and hand, and quite a few of them are necessary for controlling those implements. Some of these muscles are very small and can tire quickly (as I'm personally relearning in physical therapy exercises for my hand/arms).

Crayons, in my opinion, are actually one of the hardest child-oriented mediums to use. The wax is hard, requiring firm pressure to make marks. The inclusion of this downward pressure can make it harder for the other muscles to stabilize the other motions of the arm. It also requires gripping the crayon in a somewhat upright position.

Paint is a great option for improving the drawing experience. While a child's pencil stroke is often "scribbly" or erratic, a paint stroke is generally smooth.

I would also recommend pastels, Conté crayons, artist chalks, and possibly compressed charcoal (as opposed to willow or vine charcoal will likely be pulverized by their grip). I would remove the wrappers on these, if any, so that flat strokes are possible and upright grips aren't necessary. These media also provide rich strokes without much pressure, although they do make for messier hands.

You can also get woodless graphite pencils, or sticks of graphite, that can be easier for small hands to use compared to the fine points of wood or mechanical pencils.

You can also incorporate other mixed media, such as adhesive-backed objects or things that need to be glued and taped on. These things won't necessarily help develop specific drawing skills, but they do aid with developing expression. They can also provide a fun canvas for drawings to be a part of.

Realize that drawing is a highly skillful activity

As the stages of child drawing development show, learning to draw is an ongoing process. It's not realistic to be able to teach a toddler to draw complex objects. However, toddlers can be quite successful with learning to draw certain shapes (circles, especially!) or a selection of letters (and not just "O"!).

Each stage of development lays the foundation for the next stage1. So even if your child can't draw a recognizable animal, they're still learning to draw.

Kellogg and O'Dell (1967) have described scribbles as the building blocks of children's art.

Early on drawing skills involve the development of fine and gross motor control to a larger extent than many later stages. But without this control, even an adult will have difficultly drawing. Supposing you're not ambidextrous, attempt drawing with your offhand! You'll see how important muscle control is.

So, be mindful that any progress or practice is a success! At this age, if you can get your daughter to sit down and draw at all, then it's an accomplishment and your child is learning. Keep it up!

You teach a toddler to draw pretty much the same way you teach any activity.

Few toddlers at 2 will have the hand-eye coordination to do much more than scribble, I know my 2 year old is what I'd consider "good" at coloring and it's just a bunch of scribbles on the picture (but it shows good contact and is mostly centered over the picture!). But that's how you get her started, by giving her the chance to do it and showing her how. Kids at that age pick up a lot just by watching and copying/imitating.

In your specific case, she wants you to draw things - do so! Don't worry that you're doing most of the work. She's learning from watching you do it, and if you manage to make it more fun for her than frustrating then you'll be doing her a huge favor. I would mix different levels of drawing - sometimes draw something that's close to a child's level of talent (Stick figures) but if you can draw things that are better, do so also - both as she may pick up some more advanced techniques, and so she can see what her eventual abilities may lead her to.

And as far as calling them different things - that's just creativity, and something that should be encouraged. "Daddy, here's my train!" (scribble sort of vaguely circular) "Nice train, E, I like the smokestack".

If I were teaching my 2 year old to draw, I would start with stick figures. This is a 4 year old's drawing of a person: 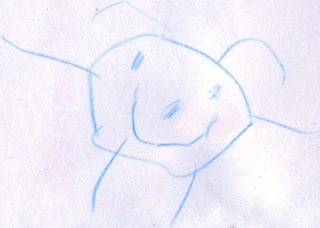 The head will be the main thing, The rest, pretty unsophisticated. But then they will eventually start to have fingers and toes and more hair.

To draw animals may be out of her league, but is she insists, draw a body like a circle, another circle for the head, and the appropriate number of limbs. Don't be surprised if it takes her years to draw this level of sophitication: 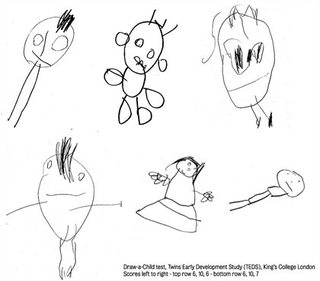 You can work and work and work with her, but likely it won't help. I remember asking my mother to teach me to draw a cute simple bunny. Hers looked so easy. I never learned, though I have very distinct memories of trying.

She won't produce anything photo-realistic, but if you break it down step by step, she should be able to produce something she is happier with. For instance for a mouse, start by having her draw a circle --tell her that is the body. Then draw a straight line at the back --that is the tail. Then two more circles --those are ears. Then two dots --those are eyes. It won't look much like a mouse, but it will be enough that she can feel good about drawing.

The key at that age is that kids are actually capable of a lot, but they don't have the ability to make the common sense connections between things, so everything needs to be broken down into very small steps. If you search, there are actually a large number of books that teach drawing in this style for very young children (you might also look up the book "Drawing on the Right Side of the Brain").

Also, make sure you praise whatever she produces, even if it doesn't look anything like the example. Remember, you're trying to help her be happy with her own creativity. You're not trying to produce the next Picasso.

Drawing's difficult. If you told me to draw a person I'd probably be on a typical 8 or 9 yo level... ;) My daughter (20m) often asks us to draw something and we do it, while she can't draw anything ... recognizable... yet. She does enjoy it anyway.

You can't really teach a toddler to draw. There's a lot of skills involved, including world perception, which is ... different for a toddler.

If you expect your child to draw something particular pretty well at this age, don't. Just make sure that you and she have fun drawing, and the skill will come in time. Encourage her and praise her "work" if necessary.

Not the answer you're looking for? Browse other questions tagged toddler arts-and-crafts or ask your own question.

20
My son witnessed a friend receiving corporal punishment; how do I prevent this from sending the wrong message?
10
16mo still not walking, I think it's my fault?
15
Worried sick about 3YO and aspergers
1
What's an easy way to do macaroni art with a toddler?
12
How to encourage a 2 year old toddler to complete colouring a sketch?
10
How/Should I deal with the playschool teacher who makes the toddler colour by holding her hand?
5
What are the activities pertaining to decorating the house with hand made objects where I can get the toddler involved?
4
Toddler wakes many times in night
11
When does a toddler understand the joke of a man falling down on purpose?
5
How can I mitigate how my toddler has generalized a fear related to insects/flies?