What are the objective arguments against immunizations for infants and children?

There has been a lot of talk lately about the alleged harmful (potential?) side effects of vaccinations/immunizations for infants and children. What are the objective arguments against immunizing?

toddler infant pre-schooler immunizations
share|improve this question
edited May 14 '15 at 14:06

Update Sept 2015: Aaron Carroll more clearly and expertly answers this in his New York Times analysis "Not up for Debate: the Science behind Vaccination".

Most of the talk lately has been about how the evidence for a link between autism and MMR vaccination is fraudulent.

So, there is no scientific research that demonstrate that contemporary vaccines are harmful, with the exception of allergic reactions (commonly egg protein) and some minor side effects (fever, headache, sore arm, tears, ...). Since even minor side effects can be serious for some populations, some vaccines are not given to all patients (e.g. those who are too young, old, sick, and/or allergic; CDC Flu Vaccine Summary for Clinicians).

There is substantial evidence that vaccines keep people from contracting serious viruses and chronic diseases. For example, a series of interactive graphics from the Wall Street Journal makes this clear, like this one showing the decline in measles following the introduction of a vaccine: 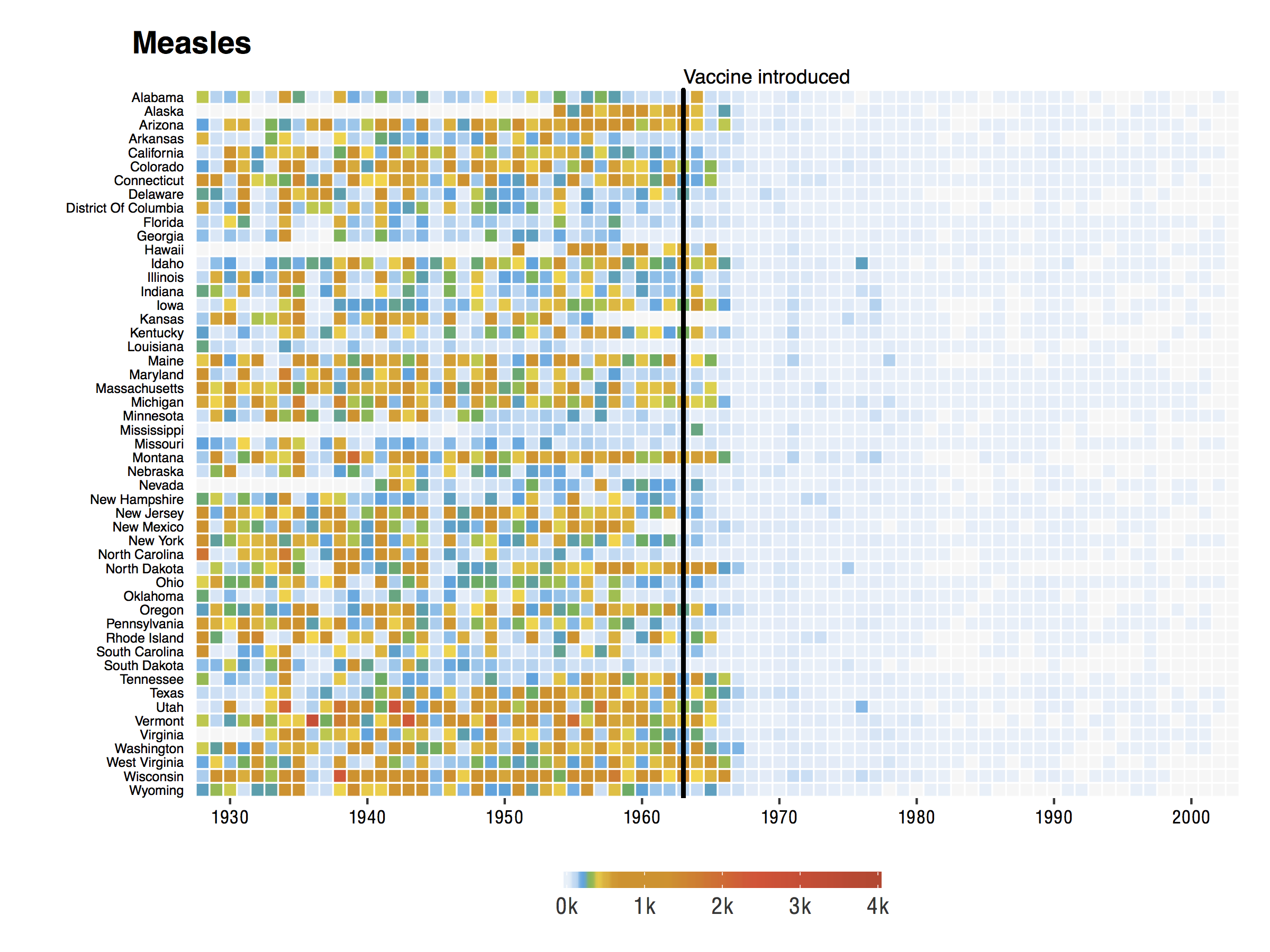 It is not possible to conclude that a vaccine will have no negative effects on health, but it is easy to estimate the probability that the net effect will be overwhelmingly positive. Vaccines are definitely not inert - otherwise they would not work. So, on the pro-vaccine side, there are many lives saved and many lives improved. On the anti-vaccine side there are minor side effects and presently undetectable and unnoticeable 'unknowns'. For the sake of being thorough, the risks of ("hospital-acquired infections") and using needles (Guidice and Campbell, 2006) are accepted as risks that are outweighed by the benefits of receiving health care.

While I can find no compelling objective arguments against vaccinating children, Dr. Sears provides a comprehensive and well referenced overview of the arguments in "The Vaccine Book". Dr. Sears proposes the possibility that it would be in the public health interest to give some vaccines at later ages and / or more spread out through time, e.g., so that a child only receives one or two in any visit. One example he gives is to question the practice of giving 1-2 day old newborns a vaccine for Hepatitis B - which is transmitted sexually and through shared needles - because the risks of a Hep B vaccine for infants and toddlers are greater than the extremely low rates of Hep B at this age, given the fact that a child of a few months or a years would be better able to tolerate the vaccine than an infant. However, Offit and Moser (2009) suggest that Dr. Sears under-estimates the risk of Hep-B by misrepresenting previous work (they also point out other flaws in the Sears Vaccine book).

I very highly recommend the book Bad Science by Dr. Ben Goldacre.
It is very relevant to your question and addresses some of the concerns you may have about Immunization.

It is also a very good book about understanding the difference between Scientific Research results and how they are published in the Media.

There is really no reason against immunisation. See http://en.wikipedia.org/wiki/Immunization. The benefits are massive. I would actually go as far as stating that denying your child immunization should be considered a crime, similar to not protecting your child with seatbelts and child seats

Here is the only medical research that I am aware of that connects immunizations with earlier onset of seizures in this disorder: http://www.onmedica.com/newsarticle.aspx?id=e7c292a8-9949-4a65-91f1-3a80d51a7f3b

This article emphasizes that the immunization does not cause the disease, but it does appear to cause it to manifest earlier.

FYI: Here is a link to an exhaustive investigative work on the source of the MMR-Autism vaccine scare. It is lengthy, but very enlightening!

The short of it is that there is none. The study that claimed a link between MMR and autism was fraudulent.

The current theory is that autism is the result of an autoimmune disease, related to rheumatoid arthritis, MS, Crohn's Disease, etc (in fact, it's known that a mother with RA or a family history of same places that woman at a greater risk for having a child with autism). The body produces antibodies that view certain brain cells as abnormal and "foreign", and attacks them.

The supposed link between autism and vaccinations can thus be explained by the vaccine's intended effect of causing an immune response in the child's body; the elevated white cell count and production of antibodies to "fight" the vaccine's disease triggers the autoimmune response. However, that doesn't mean the vaccine itself causes autism, nor that not vaccinating your at-risk kids will prevent them from developing autism. The first time your child gets sick, gets an infected scrape, or even gets allergies, the autoimmune response will kick in.

That means that if your child has the genetic predisposition to develop autism, you're damned if you do and damned if you don't. Vaccinate the child and the vaccine causes the child to develop autism; don't vaccinate the child, and the disease the vaccine would have innoculated your child against will do the same damage. Given that the genetic factors that cause autism are roughly a 1 in 110 chance in the general population, while the diseases that the vaccines prevent are a 1 in 1 shot if your child is exposed, it's madness to not vaccinate your children, especially if you don't know that you have risk factors for autism.

While I agree with most of the other answers (i.e. there are few if any objective arguments against immunizing) I think it would be more fair to stress the possible conflict between public health which is improved by immunisation programs, and individual risk.

For example the Rubella virus is dangerous for pregnant women and unborns. Immunising girls ensures they will not get the virus later, while pregnant. By immunising boys also, the risk of a pregnant woman coming into contact with a Rubella infected boy becomes very small. But there is only a little benefit for the boy.

One big logical argument against vaccinations is the law of unintended consequences. I foresee a future resembling the past where we weren't looking for mutations caused by medicines like thalidomide while we were patting ourselves on the back for reducing morning sickness in pregnant women.

Myself and others are against all mass medication like fluoride in drinking water and vaccinations.

The statistics for reductions in diseases are often shown on graphs that start when the vaccine was created and don't show that the particular disease was declining before the vaccine started being used. This misrepresentation should be cause for concern.

The power money and corruption that we see time and time again from large rich powerful corporations happens with the pharmaceutical companies also. Would you have let enron inject your children with anything?

I don't believe that there is an argument that vaccines are an overall net negative to public health. However, it does bother me that some folks try to sweep vaccine reactions under the rug as if they don't exist. It also bothers me when doctors who point out the risks are verbally tarred and feathered.

To see the big picture, you have to look at the benefits of the therapy and compare them to the risks. Robert Sears has written about this in his "Vaccine Book". He has pointed out that he has concerns about the safety of vaccine ingredients. He also points out objectively how many cases of infectious disease have likely been prevented by vaccination. (I've noticed that most writing about vaccines, whether for or against, descend into personal attacks against people with whom the author disagrees. Robert Sears seems to be one of the few authors to present objective facts about personally attacking others)

I would like to add further that vaccines are quite different from one another in terms of the ingredients used and how they are made. Some contain live pathogens; some contain dead pathogens, some contain fragments of dead pathogens. Some contain trace amounts of toxic chemicals, such as aluminum, to enhance the body's immune response to the vaccine. In short, asking "Are vaccines safe?" is like asking "Are pain pills safe?" Each one has a different profile of risks and potential side effects.

Here are some arguments:

As a parent you have to decide what poses a greater risk to your child: the diseases or the immunization.

It may be against your religion, specifically Christianity and Judaism. Leviticus prohibits consuming 'diseased' meat. Vaccines are made by infecting animal or human fetal tissue and then extracting the virus from it. Every vaccine contains some infected tissue.

You may also object to aborted fetuses being used in this way. For some vaccines you can find a vaccine from a different manufacturer that uses animal tissue as opposed to aborted human fetal tissue.

Not one study has been done to investigate whether there are any negative effects associated with the complete vaccine schedule recommended by the CDC. Individual vaccines must be tested but they're not all tested together. A controlled study should be performed that compares vaccinated and unvaccinated children.

My wife's brother and cousin both developed autism immediately after getting their MMR vaccine. They had a severe reaction that included fever and seizures and they were autistic afterwards. The medical community can state all day long that the vaccines did not cause this and we do not believe them. Watch the movie The Greater Good for more information about this.

It is believed that some people's bodies aren't able to deal with the mercury in the vaccines. We will not be giving our children any vaccines.

Vaccines were not responsible for the decline in diseases anyway: http://childhealthsafety.wordpress.com/graphs/

I should have left out the 'propaganda' stuff and just given a personal testimony. Oh well.

Ana, yes. Her brother was 18 months when this happened. He was talking. He got his MMR shot. That night he got the fever and seizures. That lasted two days. After this he stopped talking and eating and he wouldn't look at people any more. They stopped giving him vaccines. Her brother was fortunate and got much better. Today 11 years later you would just think he's odd. Her cousin was not fortunate. Today he is a 20-year old severely autistic young man. He still does not speak or look at you and his parents take care of him.

Not the answer you're looking for? Browse other questions tagged toddler infant pre-schooler immunizations or ask your own question.

0
Have there ever actually been any studies proving some immunizations cause autism?
31
What are the pros and cons of a chicken-pox party vs immunization?
23
How and when should I teach my children how to swim?

8
What is the reason for covering infants during transport?
7
What are some good strategies for preventing Diaper Rash?
24
Is the “cry it out” approach harmful?
16
What is effect of giving sugar to an infant?
5
What are the advantages and disadvantages of BLW (Baby-led-weaning) aka the Rapley method?
6
What are the pros and cons of colouring books?
3
What is the proper way to praise the hardwork and patience of a child when she deserves it?
43
What is the evidence on the danger of feeding whole blueberries and grapes to infants and toddlers?