Explaining Thunder/Lightning to a preschooler

I have a very intelligent three (almost four) year old who has a mixed relationship with thunder and lightning (see an older question from me, for example). He likes seeing it, but is also afraid of both. Part of this stems from probable sensory disorder - loud noises bother him much more than most children; but I think some of it is fear, as well (as he fears it even when it's not happening currently), in particular fear of the unknown.

One of the ways I'm trying to get over this, in addition to that from the other question, is to help him understand what lightning and thunder are in a physical sense - ie, an approachable but accurate scientific description. I want to help him understand what lightning and thunder are, what is dangerous about them, and what is not dangerous about them; and why we are (mostly) safe from both while indoors. In general, I explain physical phenomena as completely as possible, given his age; for example, I explain that rain comes from the sky when clouds are too full of water (which is true, to a limited extent). I won't explain barometric pressure yet, but cold/hot air masses I might explain at some point soon.

How can I explain this to a preschooler, so that he will have as complete of an understanding as possible at his age, and in particular focusing on having a good idea (in his head) of what they are so they're not as scary?

Essentially, thunder is caused by the air having to move incredibly fast because the lightning "pushes" it out of the way so quickly. (Technically, the heat of the lightning causes a compression of the surrounding air molecules which then expand outward)

From that, we can develop a number of experiments or activities that illustrate these different qualities.

If you drive a wedge between two objects slowly, the objects will slowly push away from the wedge. If you drive the wedge in quickly, the objects will quickly move away or even fly away. See: A hydraulic log splitter vs. splitting with an axe. The wedge is the lightning, the objects are the air. For a hands-on example, I'd use some upside-down plastic drinking cups for the objects, and my hand for the wedge. If I go slowly, the cups will only just move to make room for my hand. If I go fast as lightning, the cups will fly away and maybe make some noise when they hit other things!

If you compress a spring, it bounces away quite quickly. Just like the air has to move quickly.

If an object moves quickly, it usually makes a lot more noise. When you swing a stick quickly through the air you get that "whoosh" sound, because it's moving so fast.

It may be helpful to point out that air already makes noise at other times, such as when the wind howls.

There are surely many examples you can use to demonstrate these concepts, but it's all going to depend on his age. I think the cups example and swinging stick examples are most likely to make an impression that also leads to a mental connection with thunder.

The spring example is better suited for an older child. The "fast objects make more noise" is alright, but could lead to some false conclusions (race cars aren't really so loud because of their speed, but because of their motors).

I'm not sure how to explain lightning to such a young child aside from a static shock example, like @Chrys suggests. I'm not sure a sound is necessary, but just the idea that the shock happens. Then, you can relate the lightning to be a shock like that, but between the clouds and the ground instead of the playground slide and his arm!

A way to visualize the shocks is to make a blanket highly static charged (throw a wool one in a dryer for awhile!) and take it to his room at night (or when it's sufficiently dark). Then, as you unfurl/rub the blanket it should cause visible static shock. If you're lucky, or maybe skillful, you might be able to make the shocks appear while you're both underneath the blanket like a tent.

The blanket trick would probably be more successful in the winter, or with a dehumidifier, unless you live in drier country. Using a clothes dryer might negate the effects of humidity, though.

Does your child understand static electricity yet? If not, do you have anything to explain it with? (Rubbing sock feet on a carpet to get a little spark, for example.) If so, you can then explain that lightning is like that little spark but on a much much bigger scale, so much bigger that it's dangerous if it hits you, though a house protects you from it.

If you're able to get an audible noise from the spark (or if your child believes you that there's a little click), then it's simple enough to explain that thunder is that same noise scaled up. I don't know if I would get into the time delay between the flash and the noise, but if asked I would say that the lightning was miles away, and the light is so much faster than the sound that it got to you first. I would want to point out that a delay between the flash and the sound is one of the ways you know you have nothing to worry about from thunder and lightning. That delay proves it's far away.

There is a children's book about this called Thunder Cake. Reviews on Amazon are good, though not all reviews from reviewers are. 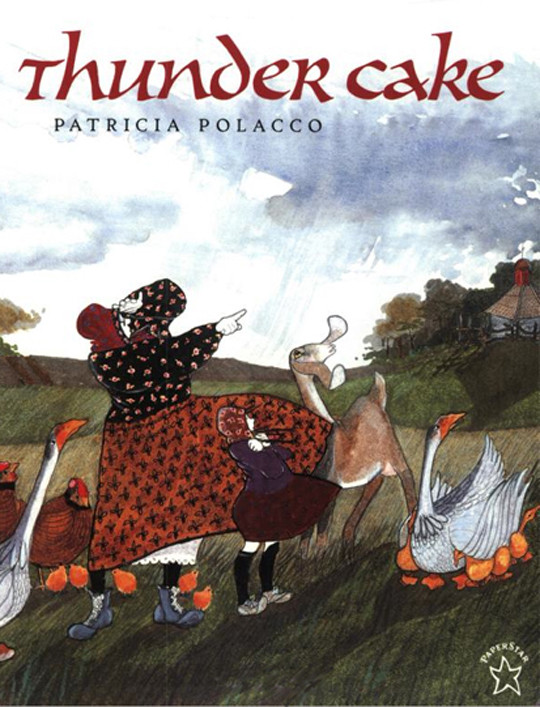 It's probably a good idea for you to read it first to see if it's something that would be good for your child.

Good question but, in my experience, the details don't matter -- he won't remember them any way. What he will come away with is a feeling of being "grown up" and worthy of an explanation, a belief that there's nothing magical or unknown about the event, that it's not dangerous even if it is scary, and that "Dad has it covered".

He may remember some of the broader concepts and help him make better sense of other things or even more easily understand it the next time it is explained.

Lastly, cherish those moments. It's a wonderful way to interact with a curious child. I'll never forget walking with my 4-year old son in a light sprinkle when he asked me, "How does rain go up?"

Not the answer you're looking for? Browse other questions tagged pre-schooler fears science or ask your own question.

4
Fear/interest in thunder and lightning

6
Explaining a c-section scar to a toddler
4
Fear/interest in thunder and lightning
10
How can I assuage my pre-teen's fear of flying
29
How do you explain to a five year-old what energy is?
4
Helping a preschooler be a good friend
9
How to (or should I even try to) break a zombie fixation for a three-year-old
10
Fear developing in three year old
3
Children mimic parents, but what to do when it gets out of hand?
4
How to help a child understand length of time?
4
Strange fears in a toddler