We live in a country where it's very popular to give toddlers a follow-up powdered formula called "lait de croissance" roughly translated as "grow milk" or "toddler milk" like the one pictured here: 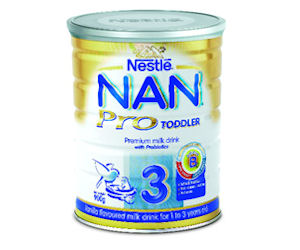 I know the formula industry has a strong lobby here with pediatricians, and many doctors (including the one we visited for a one-year check-up) recommend using it instead of regular milk. Either type of milk would of course be combined with a normal toddler diet consisting of three meals a day and eating a variety of solid foods: veggies, fruit, grains, meats, yogurt, etc.

Would organic whole cow's milk be better for a one-year-old toddler than this powdered stuff?

For most children, cow's milk (organic or not at your preference) will be the superior choice. Whole milk is usually recommended from 1-2 years old, although there is starting to be some preference for 2% even at that age for children at high risk and who have good, healthy diets with plenty of fats and vegetables (like my second, who at 18 months though an 8oz steak was a nice appetizer, and eats three eggs for breakfast some days).

The toddler formula tends to be sweeter than milk (which might help encourage them to drink it, but in general sweeter is not a plus), has a few extra vitamins (particularly DHA), and not much else. It's quite a bit more expensive than regular milk in general, and if your toddler has a normal, healthy diet, you're going to be fine on milk. You can always supplement with a multivitamin if you're worried about particular vitamins.

DHA is a good thing to have, and something that can be hard in some areas to obtain; fish is the best source, and in my experience kids love fish when prepared appropriately and not too strongly flavored (though both of mine think salmon is the best, so who knows).

Some articles about the difference; these are not scientific papers but seem to be very consistent nonetheless.

I think this question is best answered by evaluating the different types of milk.

There isn't clear evidence that either of these is better than the other. This article doesn't quote a lot of studies, but it nicely summarizes info that I have read in related studies.

One problem with organic milk and organic foods in general is that you can't always be sure that you are really getting a truly organic product. A lot of organic milk is now produced by large corporations who may not really give their cows much time to feed on grass in a pasture, may buy and mix non-organic cows into their herds, and bypass other organic rules.

And there is no clear evidence that growth hormones, pesticide residues, or antibiotic residues are harmful or that organic milk is healthier.

DrGreene.com tackles a question about feeding an 11 month old toddler formula vs cow milk. This paragraph sums things up well:

Toddlers don’t necessarily need formula, even if they don’t nurse. Children who are eating a balanced variety of healthy solids after the first birthday should be able to get the extra vitamins and minerals found in formula from their diets, perhaps with the added safety net of a multivitamin. If there is concern that your child is not eating an adequate amount of solids, formula will provide most of her nutritional needs while she is experimenting with solid food.

This Skeptics.SE answer has some great facts regarding unpasteurized vs pasteurized milk.

Goat milk has been profferred as a more easily digestible alternative to cow's milk. DrSears.com covers the differences between the two, and this infographic also compares their healthiness. In general, the two are considered pretty comparable.

Animal milk, of any kind, is designed to be consumed by animals of the same species! Humans were not made to drink cow or goat milk, but to drink human milk! However, since the question is specifically about non-breastfeeding options, I'm not going to cover it further.

One of the touted benefits of formula is all the supplements and minerals it contains. However, there are many vitamins on the market for children of all ages, including young infants and toddlers.

This actual doctor answers a question specifically regarding DHA:

Is it better to get omega-3 fatty acids from food or from supplements?

Certainly foods, since the plants and fish that contain omega-3 fats have other good nutrients, such as protein, vitamins and minerals. People who do not eat fish or other foods rich in omega-3 fatty acids should consider taking an omega-3 supplement of 500 mg per day; fish oil is used in supplements, but there are also vegetarian supplements that have ALA. Studies suggest that people who have already had a heart attack may benefit from higher doses of omega-3 supplements (basically, double the 500 mg), so if you do have heart disease, consult your healthcare provider about whether taking a higher dose of omega 3s makes sense for you.

While we're specifically talking about children, and this doctor is not, the science is the same. It's better to get these nutrients from food, not supplements. When it comes to taking a vitamin versus feeding a child formula for obtaining these nutrients, they're really the same! The formula, essentially, just has the supplements included, but they're not any different than those found in children's vitamins.

When it comes to your child's nutrition, organic milk isn't better than regular milk. Cow milk isn't better than goat milk or formula provided your child is eating a healthy variety of solid foods. After one year of age, a child's primary nutrition source shouldn't be liquid. Milk or formula, of whatever type, should be used only as way to provide specific nutrients that young bodies need in higher quantities, such as calcium and phosphorous.

When evaluating which to buy, your primary focus should really be on the rest of your child's diet. There's no conclusive evidence that says milk is better than formula, or vice-versa. Instead, most advice (mine included), suggests that you choose whichever works best for you.

7
Should toddlers drink milk during the night?
1
Is the expensive (organic, with DHA) milk better for my toddler than the regular milk?