Baby eats less than it should - is it something to be worried about?

We're not sure if we should be worried about it. It doesn't really seem like she needs more and based on her weight (around 5300g) and age - everything points to the fact she should be eating almost double what she's eating now - during the day.

When she's not sleeping - she's in a good mood, smiling, playing etc. The only thing we notice is flatulence - she really does fart a lot.

Our next step is to get a baby weight and start weighting her every day but I'm afraid that will cause just more insecurity and hysteria with me and my wife.

What should we do?

I would not weigh her every day, as that won't accomplish much other than make you worry about little changes. Children increase and decrease in weight by several ounces every day: remember those diapers you change 8-10 times a day? Each of those has several ounces of formerly-baby weight in it. Weight is very blippy (anyone on a diet who weights themselves daily probably can tell you that!). If you do need to take frequent weight measurements, follow your pediatrician's advice on frequency, time, and method. I would guess weekly is the most frequent you would need to weigh an infant of that age.

You should be going in for an appointment in 2 weeks or so (4 month appointment), I would think, as shots are usually due around that time; if not, you should bring this up with your pediatrician. Your daughter may simply be not all that hungry, and that's fine; maybe she's extra chubby and burning some extra baby fat. Your pediatrician is the one person who can really tell you if she's doing okay, weight wise, and if you're keeping track of total consumption then you'll have a good bit of information to tell the pediatrician. Other things you might be asked are how frequently she wets her diaper (to make sure she's not dehydrated) and the color of the urine, her sleeping habits, how she reacts to being 'done' with the bottle.

There are some potential causes of not eating very much; most of those have other symptoms, and your pediatrician can certainly address them. The ones I would think about as a parent are if she has heartburn (GERD) or if it's possible she's allergic to something mommy is eating. They both can have some correlation to flatulence if I remember correctly, depending on the specifics. Heartburn usually means she cries after meals (as it causes her some pain). Allergies are harder to pin down; you'd have to simplify mommy's diet and then pull in individual things to test. Your pediatrician is the best person to help you with this, if it turns out to be a possible culprit.

The only other thing that strikes me as interesting in your comments is that she's almost 4 months old and eating 30-90ml sufficiently frequently to get 650ml total. 10 or so feedings a day (assuming an average of 60ml) is a lot for a nearly 4 month old. Both of my guys by this point were eating something like 1x at waking, 3-4 times during the day, and 1x before bed. 5 or 6 total feedings, each of which was between 120 and 240 ml.

I would talk to your pediatrician about whether it's appropriate to try and stretch her out - ie, cut down on feedings, and see if she'll eat more at those less frequent feedings. This might help her eat more overall. Parents often call it 'stretching out her stomach' though I'm not sure that's physiologically accurate. I certainly wouldn't do this without talking to your doctor, though.

This is really a supplement to @Joe's answer, which is quite good. The only thing I wanted to emphasize is that weight, not the amount of milk or formula she drinks, is what is important.

The following is a sample of a growth chart (like your baby's doctor uses) which has two hypothetical patients charted: one baby represented by red marks (Baby R) and one by blue (Baby B). 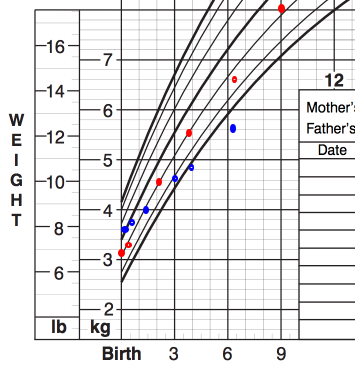 You can see that baby R weighed 6 pounds 10 oz at birth, 7 pounds 3 oz at two weeks, 9 pounds 14 oz at 9 weeks, and so on. The important thing to note is that the weights are clustered along the same growth "curve".

Baby B weight, meanwhile, is crossing three "curves". This is an indication that something is wrong and special investigation is warranted. This is fairly uncommon (and purely hypothetical for the purposes of illustration).

Your baby doctor will be monitoring your daughter's weight. That's part of their job. Yours is quite hard enough without taking on extra worries. If your daughter is wetting and soiling normally, turns away food when she's full, and is behaving normally, she's very likely to be coming along quite nicely.

When you go to her 4 month visit, you can ask to see her growth chart to ease your worries. (Variations can be greater than shown and still be within normal limits.)

From about that same age both my girls hated food and for the most part they still do. The pediatricians (if they're any good) will let you know if they're sliding down the weight expectations too fast. They'll suggest a whole regiment for calorie packing, which I suspect kept my girls from liking food because it does indeed alter the flavor of things.

Developmentally my girls are totally fine. One is pretty much at the bottom of the percentiles for growth in every physical level but you would never know based on how she learns, plays, speaks, etc.

When they were younger it was a huge challenge to get them to drink even 9 ounces of milk or formula a day. They say babies should drink something insane like 32 ounces but I lost track of the suggestions because mine wouldn't come anywhere close. The doctors gave me probably a dozen calorie packing books even though I explained to them over and over that eating 0% of a 200% calorie packed meal is still 0 calories. After the years of battle, the general rule that babies won't let themselves starve seemed to be true. If it's not true, you will know it by their behavior, lethargy, and rapid decline in weight.

I'm no doctor or official source by any means. But from experience I can say all the trauma my wife went through fearing the doctors would confiscate the girls or medically intervene with G-Tubes or some other forceful way of feeding was unnecessary and even far from the reality we dealt with. If there's a reason to panic, they will tell you long before they resort to tubes.

What worked for me, since I was the one feeding most of the time, was occupying them with different environments and experiences while holding them and holding the bottle. It would take 20 - 30 minutes per bottle and they would usually only get through 3 ounces before you could tell they were done with it. I would let them touch lights, curtains, go outside and touch trees, flowers, etc. Anything to get them off the subject of refusing the bottles.

By the time they were about 1 1/2 maybe 2 years old they were pretty much reliable about feeding themselves, though to this day they still don't eat much. But the hype and hysteria surrounding feeding like this - that they will never eat on their own, etc, was not entirely true for us. Yeah, it was a long and absolutely horrible ordeal that is currently its own nightmare, it is at least tolerable and the girls are growing, learning, playing, speaking and being kids just as they should.

So what should you do? Hard to say because I don't know what you are currently doing. But you can try what I did and hold her in one arm, the bottle in another, and walk around getting her to look at things, touch them, go outside, or anything else you can think of that makes bottle time a fun time. Getting angry even once could reset that to bottle time being a really bad time. Happened to me more than once. I concluded these things because the suggestions from the doctors did nothing. Occupational therapy was a waste of time and money. Turns out just being close to my kids was what did it.

Good luck though. I would have to be institutionalized if I had to go through that again.

Not the answer you're looking for? Browse other questions tagged infant development health eating or ask your own question.

9
How do we help our toddler to sleep through the night?
4
Are shaking legs something to be worried about?
10
Is my pediatrician missing something about my 3 month old's gas pain?
48
Should I really be insisting that my daughter finish eating her meal?
15
How can we get our 5 year old to behave during eating, without us nagging all the time?
2
8-month-old wants to eat in the night but won't take milk
1
Is it normal for a 3-month-old to eat every 1.5 to 2 hours per night?
6
How to prevent a meltdown before bed for a 4-year old?
1
12-week-old baby reduced food intake