How to help our 9-year-old, who struggles with math, to focus?

My 9-year-old son is quadrilingual (fluent in all), education is in the language that both my husband and I are not speaking. He is our only child. We live in the Dutch speaking part of Belgium. We changed already three countries (including Belgium) since he was three years old but decided to stay here a bit longer. He is tall for his age but much too sensible. He's empathic, funny and helpful to others but lacking self confidence, easy to victimize himself, often thinks his friends don't like him.

The school he currently visits is also focused on music, drama and science. Besides math, he doesn't have any other issue with any other lessons nor any behaviour problem. He started primary school here in Belgium and ten days after we arrived here, he passed a kind of exam for Dutch to go primary school. If he hadn't passes it, he would have had to go to kindergarden one more year, for language skills.

Unfortunately we had many bullying issues, mainly by older kids. These caused us to change school three times due school's policies toward bullying. I think it might have caused the delay as well I would say, because his first catholic school was very strict (giving at least two to three homework assignments every day). My husband and I didn't want him to have a religious education (that was the first school we found). However, he wasn't bad at school.

Last year we changed to a different kind of school, it was like Waldorf (Rudolf Steiner) but way more like hippies, lacking discipline completely. Classes were a mix of differently aged kids (he was eight, while some kids were ten, eleven and twelve). We thought kids could be more easy going and peaceful but he got bullied constantly by two 12- and 11-year-old kids. It was terrible! So far, this school is good, no bullying (because there are no kids older than nine to ten).

His reading and grammar skills are higher than class average, however he has had issues with Math since 2nd grade. IQ test was normal and the specialist indicated that "it might even be higher because I had to tell him to focus, instead of talking about something else, every five minutes.

He understands perfectly when we explain to him (in two different languages) but he is completely failure about multiplies (except 5's, 10's) and subtraction. Everytime we are tying to tell him about math, he is avoiding it and says at the beginning "ah these are too difficult, I am not good at it".

I would say short time memory issue but he is good at memory games. And if I say "attention issue" then every night, before going to bed, he reads books for an hour or two.

We are even taking him to sports like swimming and martial-arts to help him to focus.

I've taught eighth grade (13-14 year-old kids) algebra for 28 years. The kids who arrive at middle school not knowing their basic multiplication facts are very unlikely to succeed in math in high school. Those facts are fundamental to everything from multiplication to division to fractions to factoring polynomials. They don't really understand any of these topics because they never knew the multiplication facts required to practice more advanced topics.

You have two problems. The first is that he thinks he's too stupid to do math, and because he feels that way, he deflects it, he gives up.

The second problem is that he's already behind in a vital skill. You have to address both problems, so you have to push him without being pushy. Start by explaining how few facts there really are. Draw a typical multiplication table (0 through 10) and start doing the easy ones with him. 0s, 1s, 2s, 5s and 10s are easy. Of the remaining ones, cross off half ... if you know 4x7, you don't need to learn 7x4. 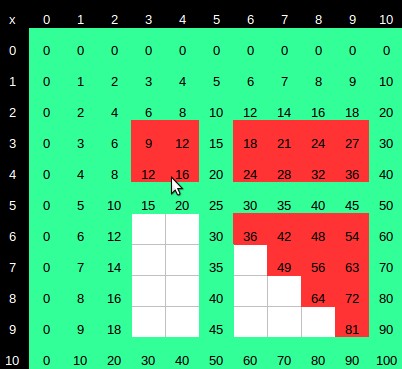 The green ones he knows. The blank ones he doesn't need to know. Only the red ones need to be learned. Just work on a few of those at a time, and he can get them.

Math is very hard to learn if you're not taught in a way that makes sense to you, and unfortunately there are several different fundamental ways to learn math, often only one of which is taught.

Often what is necessary is to see what a child's learning style is, and then adapt (either by adapting the lesson to include that, or by having some extra outside learning sessions with a tutor or mom/dad).

For example, students learn multiplication effectively several different ways. For example - not an exhaustive list at all:

Additionally, learning styles can have different underlying elements to them. * Some learn very visually. Strings of beads, legos, or other tools can be used to visually show multiplication (a lego that is 2x4 has 8 studs, for example; or use several legos to fill in a square that is 4x7 and then count the studs). * Some learn primarily by repetition. Do a thousand multiplication problems and you learn it. Visual learners often won't be able to do this - they might memorize the answers eventually, but they'll not be able to do "new" multiplication without the understanding from the visual method. * Some learn by understanding the underlying fundamentals. This is largely how I learn: I have to know why multiplication works. Visual methods can help this, but I still always wanted to know the reasons.

You also have the potential problem that he may be missing some fundamental underlying piece that is important to understanding multiplication (for example); he may not have understood something about the number system, for example, but memorized the details sufficiently to pass tests and homework. This can be devastating: if you don't understand the commutative property of multiplication, for example, algebra becomes extremely difficult.

If your school system is a good one, they should understand this, and be able and willing to work with your student to figure out how he learns best. If not, then I suggest finding an outside resource; in the US for example there are companies that specialize in customizing learning to your student's needs, and often can make substantial progress in a fairly short time simply by explaining some major missing piece that your student didn't understand.

It's tough not to speak the language of your child's school instruction. But there is a very helpful tool out there! Dutch speaking kids have the possibility to use rekentuin, or 'calculating garden' for learning basic mathematical operations. It's made like a game, you have four flowers (one for each operation) and as you answer questions, the flowers grow. Kids get points for playing long and prizes for playing well. The game assesses their skill level using their response times and whether the answer is correct or not. It adapts the questions to each child's level of ability as the game unfolds. This game has been adopted into many schools in The Netherlands, as a standard part of the curriculum. It was made by a team of developmental psychologists at Amsterdam University.

There are several advantages to this game. First, it's very carefully made to be fun, and not too frustratingly hard. This aids both learning and confidence. Second, as feedback is automated, it allows the child to do much more than in a school setting, and will a smaller time delay between performance and feedback. Third, the program follows the response patterns of the child, and can point out (to the teacher, or parent) the typical mistakes a child makes. I highly recommend it.

You need to make an account for him, so someone should help you with the first login, but otherwise it should be pretty straightforward.

Of course, math is much more than basic arithmetic, but getting this down well is an important start.

It sounds like he needs drills, and if he thinks he's bad at it the drills need to be fun.

We have some tablet math drill games that our kids (7 & 8) really like. Ours are Lakeshore Learning, but you can check out TuxMath and GCompris (for Linux) or ask the teacher for suggestions.

Our kids are not way behind but they need some more support. We have settled on a rule: to watch TV on the tablet (YouTube), they need to play three levels of Bubble Pop. We started them at the easiest level and let them work their way up. It is fun even when it is easy because you have to find the right bubble and pop it. They tend to get engrossed.

Their teacher sends them home with a lot of drill worksheets that do a nice job of illustrating patterns like things that add up to 10. There are probably some great drills for multiplication.

Puzzles are great, too. Check out Mathdoku -- our kids are not ready for that, but he ought to be able to do 4x4 puzzles.

I'm not going to try to make an exhaustive list of possible math games, but start asking around. You want things that are easy for him so he can build up to the harder stuff and gain confidence.

Not the answer you're looking for? Browse other questions tagged school middle-childhood bilingual math attention or ask your own question.

7
Should I seek a medical professional when the school says my 10-year-old has a learning disability?
4
What are the pros and cons of having an advanced student skip a mid-elementary grade?
9
Does extended looping improve student outcomes in elementary school?
8
How to help a 2-year-old settle in day care where a foreign language is spoken?
5
How can I work with a math teacher who is having trouble differentiating learning?
2
How to encourage 9 year old to stop whining and independently practice their math?
6
How do you respond to unfriendly parent volunteers at your kid's school?
4
What to do about my future wife's 8-year-old son who does what he wants with no regard for anyone else?
3
How to explain addition vs. place values to a 4½-year-old?