What is cranial osteopathy?

Some of our peers have recommended we take our 10 week old daughter to see a Cranial Osteopath, due to some sleeping issues and general crankiness.

I've tried searching the web for an unbiased scientific explanation of the benefits of this therapy, but am finding many quasi-medical shill sites which leave me skeptical.

Is this technique 100% safe for very young babies? What is it, and why how is it supposed to help?

sleep newborn health
Share
Improve this question
asked May 17 '14 at 21:53

This is what Wikipedia had to say:

The evidence base for CST is sparse and a demonstrated biologically plausible mechanism is lacking. In the absence of rigorous, well-designed randomized controlled trials, it has been characterized as pseudoscience, and its practice called quackery.

Relying on CST instead of effective treatment can be dangerous. Moreover, its practice indicates poor judgement that may harm patients in other ways. At least two deaths associated with craniosacral therapy have been reported:

In 2003, a Pennsylvania chiropractor (Joann A. Gallagher) was convicted of insurance fraud in connection with the death of a 30-year-old epileptic woman whom she treated with cranial therapy. Court documents indicated that the patient died of severe seizures after following the chiropractor's advice to stop taking her anticonvulsive medication. The fraud involved submitting insurance claims falsely describing Upledger's "meningeal balancing" as spinal manipulation [8].

In 2012, a Missouri dentist (Joseph H. Kerwin) had his license revoked for contributing to the death of a 2-day-old infant who had been brought to him because of a high fever. Records in the case indicate that instead of referring the parents to a medical facility, he manipulated the child's skull and applied a vibrating machine to his sacrum. The boy died 12 hours later, and the autopsy showed that he died from complications of a subdual hematoma (a blood clot that compressed his brain). The medical examiner concluded that the hematoma could have been present at birth but was more likely caused by the skull manipulation. The dental board concluded that Kerwin had acted outside the scope of dentistry [9].

The following is not a recommendation one way or the other, but a sharing of information to help you make your own decision in this matter. This is a lay interpretation of the article cited below which is a review of research into cranial osteopathy, a practice that has not been proven to be beneficial but for which there are thousands of practitioners with satisfied patients worldwide.

The body has many rhythmic systems. The cranial rhythmic impulse (CRI) has a rate of 6-15 cycles per minute. It is slower than the heartbeat and asynchronous with breathing. Recent research suggests that CRI may be synchronous with the rhythms of fluctuations in arterial blood pressure (Traube-Hering-Mayer waves or THM). Currently, there is no mechanism for measuring CRI - it is done by hand. A skilled osteopath will have consistency in his own measurements, but there are variations from osteopath to osteopath which suggest some unreliability in measurement (and the need to find an experienced osteopath if you go this route).

The questions currently being asked of cranial osteopathy for which more research is needed are:

I received cranial osteopathic treatments as an adult. In the treatment I received, sometimes the osteopath would have her hands under my head as I lay on a table, and occasionally she worked in the roof of my mouth, around the occipital bones or underneath my hip bones. She applied a very gentle pressure. Her goal as I understood it was to even out this rhythm of movement of cerebrospinal fluid.

I found the procedure very calming, but I cannot say that it helped me medically - it may have contributed to an improvement in well-being, but other factors may have been responsible. I have met people who swear by it, especially for infants. I have not researched infant cranial osteopathy specifically. It is a common practice in some countries, and was covered by insurance where I lived at the time.

Below is a link to a more recent article than the one in my other post (2009). It is a study which found a significant association between an abnormal CRI in babies at 2 weeks of age and excessive crying at the age of 6 weeks. Measurements were taken by multiple physicians who were blind to each others' readings and blind to the infant's medical records and information about crying history as measured by the Ames Cry Score.

The study does not establish whether cranial osteopathic manipulation will correct abnormal CRI in infants, though it does cite other reports chronicling anecdotal evidence of reduction in crying following treatments. I have found studies of treatment efficacy in adults, but controlled studies on infants are more difficult to design.

Some pertinent excerpts from the study on infants: 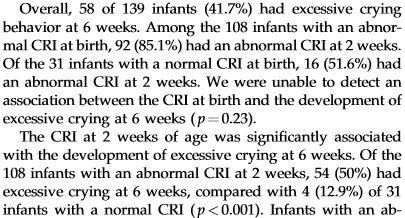 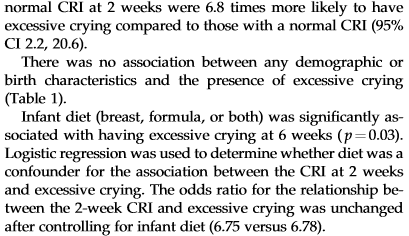 Not the answer you're looking for? Browse other questions tagged sleep newborn health or ask your own question.

4
What precautions do I need to take in the event that my baby is born with Hemophelia?
11
What to read or learn before expecting?
11
What items should an infant first-aid kit contain?
5
What are the dos and don'ts related to massaging an infant?
9
At what age should I expect a child to turn to the direction of the sound?
4
What is the term for the wool like stuff that secretes between the newborn's fingers?
2
what is going on with the 2 mo old morning struggle?
3
What are practical tips for helping newborn with possible "Silent Reflux" condition?