My daughter's favorite director at the theater we work with (she is an amateur actress) is directing Romeo and Juliette in January. I got a call last night and was asked to play a part where the previous actor was no longer able to play the part and the director said she needed people to fill the party and market-place scenes. So now we are involved.

Since I homeschool my daughter, I thought a unit "An introduction to Shakespeare" would be a compelling way to take advantage of the opportunity and work with her with this classic playwright's work. Obviously, we will be taking a look at Romeo and Juliette (Seussification of, a children's version, West Side Story and the actual play) but I wondered if there was a good comedy for a younger audience by Shakespeare. I am not terribly familiar with most of his comedy's (most of my exposure was to the tragedies for some reason). So my question is two-fold.

Are there any suggestions out there for great activities to do with kids to help them better understand the poetic breakdown of Shakespeare's writing - as well as its meaning - how sonnets work, the intracacies of iambic pentameter . . . **And which of his comedies is likely to be best-suited as a good read-through for a seven-year-old with advanced reading capabilities and vocabulary?

First, some suggestions for some of Shakespeare's comedies:

As for teaching suggestions....

For starters, I'd recommend reading the works first, before watching them performed. There are quite a few annotated guides, that provide explanations for the archaic terms and more convoluted phrasings. Some of them also do a good job of pointing out the many double entendres. I like the Signet Classics line of books for an introduction, but there are probably others that would serve as well, or better.

Regarding iambic pentameter, I believe the only way to truly appreciate Shakespeare's use of it is to try writing your own. Start by writing a few basic paragraphs in standard iambic pentameter. Then start comparing them to lines from Shakespeare, looking for the variations and inversions commonly used. Short video clips of performances can be used to highlight how these sound on stage.

I would do Shakespeare first as just entertainment - good stories, good language play. Later, you can revisit it to talk about poem structure or the names for particular rhymes or rhythms. It is really cool to experience a recognition when you come across a piece of information. Consider this poster I took a picture of in The Globe Theatre earlier this century: 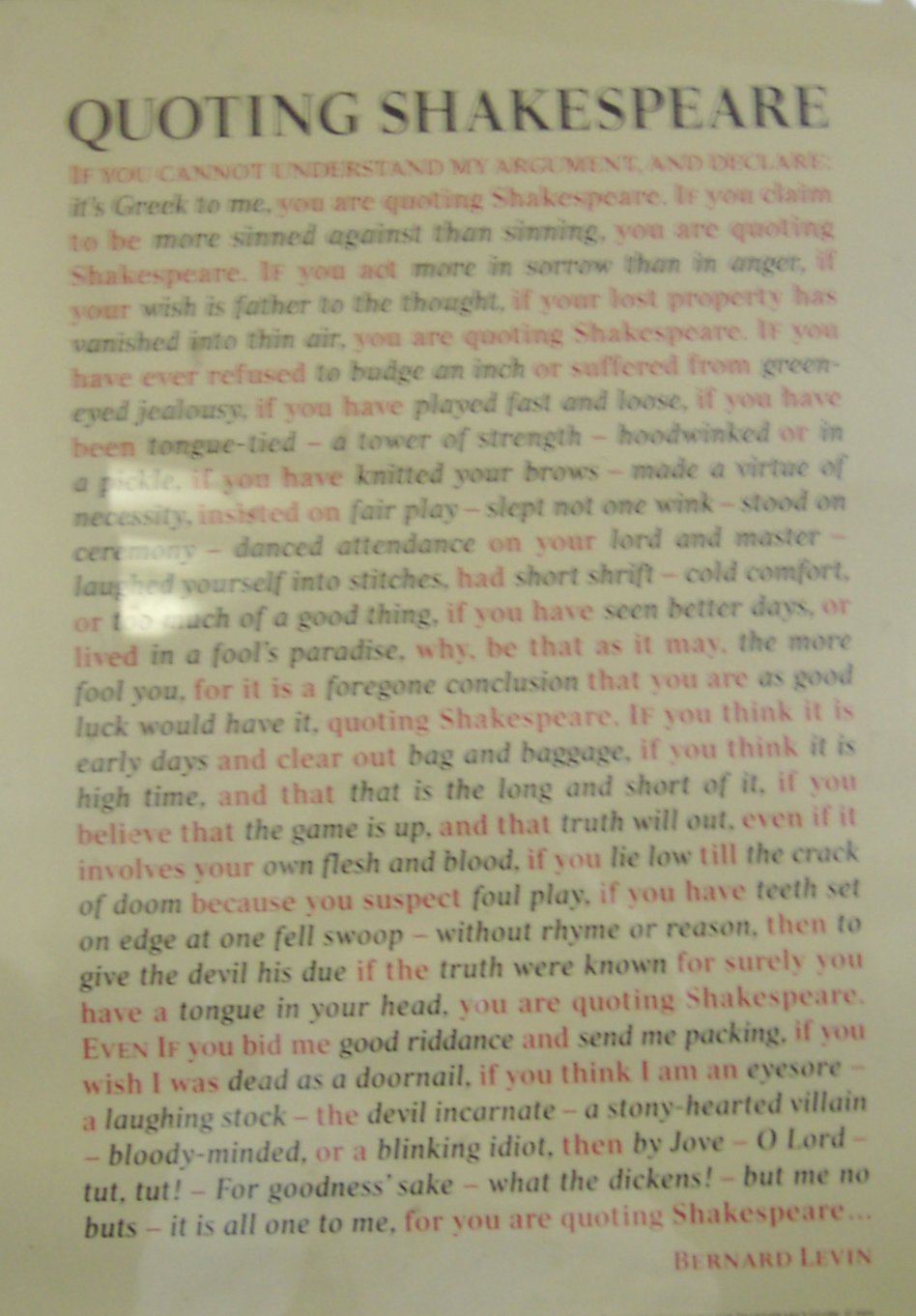 You may need to do some translating but just reading the plays together as fun will put you in a good place later to analyze them. You can find lists of companion books and strategies: one recommends the Charles and Mary Lamb book, which we have, though I was mortally offended by the preface suggesting older brothers should be careful about which stories to read to a younger sister. The prose in that book is now almost as old fashioned as Shakespeare's, which tells you how long this has been something parents cared about. Another resource suggests their own $15 PDFs, but give you extracts so you can see if you like their style. They start with Julius Caesar which I think is crazy. I would go with Dream. It's dirty as anything, but kids may not catch the wordplay since it doesn't use modern words for sex acts, and if you can read it with a straight face it may appear more platonic than it is. I also found a library program whose curriculum may give you some ideas.

If you get a Complete Works you can do comedies first and work your way up to tragedies. You can also skip scenes you think might be a bit much for your child. Just summarize those without the gory details or heart rending misery or whatnot. Eventually "To be or not to be" will be a real sentence that makes sense to them, but at this age "he is very upset and trying to decide what to do" might be better. Actually, most of Hamlet and MacBeth are kind of hard to explain to a child - patricide and so on - maybe leave those for a while. The ones with magic like Dream and Tempest are probably good starts if you're ok with that. The ones with abiding social issues like Merchant give you plenty to talk about. But the mechanics of how power transitioned in royal families and who murdered who, or what wars are like when fought by hand, you might want to wait a while for.

My mother took my seven-year-old daughter to see a production of A Winter's Tale recently. It was aimed at children so included some extra explanation, but apparently they didn't dumb it down or change the language, yet she was able to follow along fine. So that one could be good.

So, I'm answering my own question as a number of things happened that sort-of solved the problem for me, I stumbled on some great resources and wound up combining the answers that were given here too (both from answers and comments really).

First, I agree with Beofett even down to preferring the Signet Classics over many of the other options we encountered - even the "No Fear" translations that make it possible to read it in a "modern interpretation" are not all that helpful because a lot of the nuance gets lost and it is too tempting for her to just read the "modern take." The Folger versions are also very good - but include a little too much.

Touch of Greatness was a wonderful film about a man that was clearly a spectacular and inspiring teacher - I do recommend it. However, Alice found it a bit boring and "old fashioned" so I didn't make her watch it. The main point of the movie within the context of what I was looking for though, was that actually acting out the parts makes all the difference in the world for kids and that they really can understand Shakespeare in a very deep way.

The best resource I found to help guide us was How to Teach Your Children Shakespeare which goes over a few of the plays in detail and breaks down a few key scenes as well as contains biographical information. The online resources have printable quotes pages that are designed to help with visualization of lines the kids will memorize (that are explained in depth within the book) and audio clips of professionals reading the lines with proper pausing and pronunciation as well as nice emphasis and emotion. Like Beofett, the book starts kids off with a Midsummer Night's Dream.

There are quiet a surprising number of "kid's versions" of even the darker plays like Macbeth, both in books and other media. We enjoyed Jim Weiss' tellings of Romeo and Juliet, Midsummer Night's Dream and Taming of the Shrew.

Another actor in the play with us is a Literary professor and suggested to really focus (from an "appreciate the writing" standpoint on finding the antitheses in whatever we are reading. The suggestion was that it would push vocabulary while also setting Alice up for a good understanding in symbolic/metaphorical language. We did this and also analyzed the prologue to Romeo and Juliet considering it one large antithesis. Since the prologue is a sonnet (generally considered a poem for expressing love) it is interesting that there are some twenty words in it like mutiny, enmity, brawl (or other words that demonstrate actions that stem from hate or are violent) "Where civil blood makes civil hands unclean."

Chrys' image made me think to look up modern tales inspired by Shakespeare as well as music that references Shakespeare. When I pointed out that the song in Harry Potter and the Prisoner of Azkaban the toad and kid's choir sings at the beginning had lyrics from Macbeth, Alice was stoked. We had no trouble finding all kinds of things that reference Romeo and Juliet. Then, since Valentine's Day was part of the time span that passed between posting the question and now, her teacher had the kids play the "Great Couples" game where you have to figure out who you are (based on a card on your forehead, or taped to your back) and then find your proper match - coincidentally she was Juliet - which we got a good laugh out of.

We wound up actually acting in Romeo and Juliet, so my daughter learned a lot about that play in particular. She had a line (as potpan, the serving person) and a couple of other unspoken parts, but in the process can now say the lines of Lord Capulet when he is angry and Juliet, the lines of both Romeo and Juliet for the first half of the balcony scene and the love sonnet from when they first meet, as well as a few other bits here and there - It wound up being a truly wonderful experience for her and the woman that played the Nurse is director of the local Shakespeare repertory theater and invited her to join. Alice will actually be acting as one of the witches in Macbeth in a single scene rendition for a festival coming up and is in charge of presenting a two minute biographical speech on Shakespeare himself. Now, my biggest problem will be in avoiding over-exposure as Chrys warned against.

Anyway, I appreciate all the postings and the help they offered so thanks to all of you, our studies have been rewarding so far and I am sure will continue to be.

Not the answer you're looking for? Browse other questions tagged education primary-schooler or ask your own question.

23
Introducing my children into my disbelief in a Christian environment
3
Strong-willed child? What am I missing?